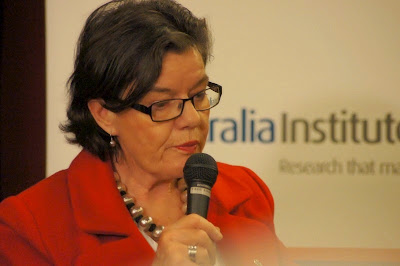 She's an independent and she knocked off Sophie Mirabella at the last election. I met SM once so I can only admire Cathy McGowan's success, but interestingly, she spoke of the role of others in this success. Cathy spoke at Politics in the Pub for the Australia Institute, and if I had to take one message from the session, it would be this: "If not now, when; if not you, then who". She said it a few times. It means be involved, take part. If you don't someone else will, and they might not share your thoughts and values. It's really the essence of a democratic society, that citizens are informed and involved. I mentioned this to a young woman recently and she just insisted "I'm not interested " and the obvious response is "they are interested in you". It's also the story of Athens, where citizens (admittedly a limited cohort) voted in mass, with quorums of 5,000. It's very different from our representative democracy, but that's what we have. As a central theme, Cathy recounted a story of Capability Brown and his garden planning that had actions planned out to 200 years. It made her realise how, at the political level, we've lost an ability to have vision and to plan. We should "trust in the future". So she questioned politicians on their plans, and they had none. (Ah, modern government, bereft of plans but replete with a small number of winners). Cathy ran through her actions, how she was asked to run, how youth and their involvement is a strength, how the electorate has interest when given an opportunity to be involved and consider and discuss. She spoke of various parliamentarians who have given advice: Tim Fisher: "dot every i, cross every t"; Tony Windsor: "be yourself" and "the future belongs to those who turn up"; others. She talked of her work in Parliament, how she identified the issues of concern to her community and of youth who otherwise were leaving rural areas (if I got it right: climate change, jobs, telecom & broadband, rural equality), of lobbying and respect for other Parliamentarians and making connections. She spoke of her limits but also promoted involvement in others, of techniques for involving the community. Strangely, Cathy struck me as a parallel to Obama the community organiser. She spoke of self-awareness and the effectiveness of a Net-literate generation. She mentioned the future, changes in being in Parliament and an awareness of a next election. She spoke of Malcolm Fraser as a "wise elder" (strange this, given my recollections of the 70s, but he's grown in stature). Importantly, she spoke of respect in conversation and how they avoid political dualism: "it's not about being right, it's about being heard". About Labor's rebuilding: "not my battle". And often, she spoke of her limits and that she must "stick to her knitting". She spoke of a lack of vision on the Hill; of the availability of money for good causes; of the need for individuals to be involved. He messages were simple but inviting: be involved and respect others. Pretty simple when put like this and it worked, at least this time. The power and money are largely on the other foot, but there's passion if people can be involved. Let's hope so. Things are dark at the moment and there's a motza to do. We need more like Cathy and her supporters.

Cathy McGowan (MP, Independent for Indi) spoke at Politics in the Pub for the Australia Institute.
Posted by Eric Pozza at 5:20 pm