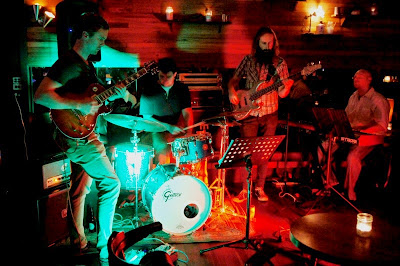 It was a last minute change that had PJ Jnr & the Soul Pimps playing at Hippo Co. A double bass gig (James Luke and Lachlan Coventry on two different takes of 6-string electric basses with Mark Sutton drums) was called off at short notice. That was not the only change. I hadn't been to Hippo for some time, but now it's Hippo Co with its new livery of Alaskan bar with snow shoes, wagon wheels, lots of timber and stained glass lights. It still has ranks of cocktail liqueurs but now looking more warm and homely. Still noisy, but the Soul Pimps could handle that. They started with smooth funky takes on some standard modal jazz and this fit the cocktail groove. But then, as somewhat a surprise, Damien laid down some rap and the second half of the longish set moved to original groove tunes with vocals. This was not standard jazz repertoire, but funky and popular and played with the chops of well trained jazzers. Aron played fluently with a clean tone, but there were echoes and I particularly liked the choppy wah guitar chords that are integral to much funk. Damien played piano or Rhodes or organ tones from his Nord and was both fluent and frequent with his solos. Kay was rock solid, resolute, unrelenting with just occasional structural fills and James was his usual inventive self, stating the changes admirably but with liberal melodic embellishments and varying tone-colours. I liked the first tunes, modal made funky: the way the changes were implied and tempos slowed and feels funkified. It's nothing unusual or particularly new, but a living style that enlivens bar-life and it goes well with the original vocals numbers. The songs were decent, too: repeating structures, sparse chords, often heavily syncopated. I enjoyed the rap, perhaps more than the singing, for its essentially rhythmic nature and its contemporary feel. Not that I heard the words and I still maintain that words have import in songs. The second set was louder as it commenced and I was only staying for the first set anyway, but I enjoyed the skills and the funk and the cocktail bar night-life that's so different from a jazz club. Nice one.