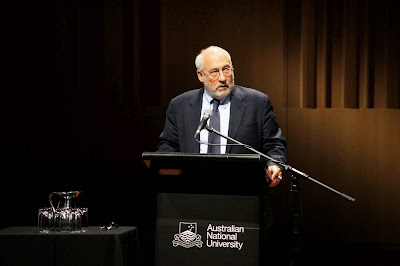 Joseph Stiglitz spoke at the Llewellyn Hall for the ANU Crawford School of Public Policy and the comment that most caught my attention was that we are building a bubble to solve the problems of the previous bubble, the bubble that was the GFC. I hadn’t thought of it this way, but it makes sense. Low interest rates used to push investment, more share market highs and double digit growth in equities and the continual threat of investors pulling the plug if rates rise. It essentially means the problems that caused the GFC remain unsolved and only symptoms are being treated. Scary. Doubly so when we’re avoiding the real problems, climate change being the real-est! The rest of his talk was confirmation of my world view and nothing unexpected - but also nothing hopeful. He spoke mainly from a US/Internationalist viewpoint, so lacked some local relevance. Countries that took “strong measures” in 2008 avoided the worst of the GFC (Australia, China, others). The GFC was the worst downturn since the Depression even though the economic models predicted it “couldn’t happen”. A “single minded focus on inflation [was] wrong”. Adam Smith’s invisible hand seemed invisible because “it wasn’t there”. We have 200 years of market failures which should teach us better. Diversification can be a disaster, eg, when you spread the US housing crisis around the world (a disaster for the world, but not the US). Greenspan admitted a “flaw in [his] reasoning", but why is it a flaw when the incentives for bankers were for short-term and high risk. So who’s to blame? Bankers, yes, for excessive and predatory behaviour and market manipulation. (Good regulation after the Depression gave 35 years without crises; there have been 100 crises since Reagan/Thatcher deregulation). Regulators, yes, because they should have understood. Economists, yes, because they promulgated these ideas. Now, a bad response is leading to a long-lasting crisis. Even before the GFC, the growth trend was lower than after WW2, with lower shared prosperity and a move of wealth to the top. Thus, the private financial market has wasted resources; 20m are looking for jobs in the US, although the participation rate is the lowest in 30 years. Growth since the GFC is anaemic: <1% for US and Germany, and the bottom 30% have had a decline of 30% in wealth, while the top 1% have received 95% of the benefits. US male real median income is now below that of 40 years ago and there are “many angry people”. Europe is worse. Spain and Greece have 50/60% youth unemployment and GDP has fallen 25%. This is depression. The lack of recovery follows a lack of aggregate demand due to austerity, high inequality and a need for structural transformation. Inequality is no longer a cry of the hard left: the IMF and World Bank now warn that inequality is bad for growth and stability. And reduced income (through austerity, etc) prevents education, physical moves and other changes to assist structural change. The concern with structural change interested me. Stiglitz spoke of the Depression as a time of structural change (agriculture > manufacturing) and the GFC as the time of another (manufacturing > services). And free education (for returning soldiers, etc) after WW2 was important for structural change. Key areas for structural change are education and health, and these are largely government-funded and suffer with austerity drives. The Gini measure in Denmark is 50% different from Australia (Not sure of the direction, but in the direction of equality), and yet they are successful with the same economic laws. He warned that countries that follow the US model get lower growth and higher inequality. [See Australia here, increasingly].

Then some questions. University deregulation: the most successful universities in US are not-for-profit or state; for-profit universities “exploit the poor”, measured by revenue from government and success rates (graduations, jobs), and there is “almost universal agreement [of this] in the US except for lobbyists” and it’s a “national shame”. Have the politicians learnt lessons? “This varies … depending on closeness to Wall Street”. “If it’s too big to fail, then it’s too big to exist”. The “main problem” is a “distorted political system” [I fret that Australia is rapidly catching up]. Why does zombie economics keep returning? Because of special interests, incentives influencing economists and the difficulty (for economists, as for any other profession) of admitting that you’ve been wrong. Two amusing but serious points here. Stiglitz joked that economists are not recognising their own rules: they think they are not influenced by incentives, and that economists (in not admitting past errors) don’t accept their own negative sunk costs. Any comments on the recent suggestion of BIS (Bank of International Settlements) about interest rates being held down? Financial stability is not solved; GFC was a crisis resulting from excess debt and over-leveraged economies, and yet we treat it with low interest rates to promote investment. Is this just creating another bubble? Responses to the GFC. In the US, medium real wealth dropped 40% and yet no government support went to homeowners, only to banks for a new “trickle down”. This was “clearly wrong … it didn’t work” and promoted suspicion of government. Not just too big to exist, but “too big to fail [also means] too big to gaol” and that’s what we saw. Example: the Robosigning scandal, where banks discriminated against blacks and Hispanics, ignored sloppy records, committed perjury on 1,000s of cases. “Our rule of law protected the bankers, not those that needed protection. [This is] justice for those that can afford it”.

All tragic and all known if you bothered to listen and read from reliable sources. Sorry for the bleak picture, but I see it can only get worse and the evidence is all around us. There are some things about Canberra (the government, not the town) that I am not so keen on.
Posted by Eric Pozza at 2:40 pm