Let's hope it remains this way 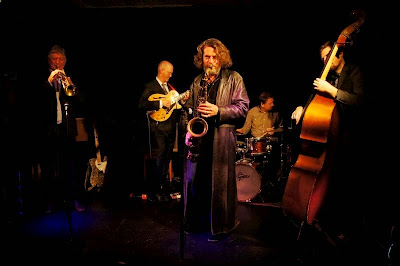 There are times when you realise the professionals are playing and you sit back in awe. This was one of those times. It was a group from the Music School Faculty. Mostly old mates: John Mackay with Miro and Greg and Mark and newcomer bassist Alec Hunter. Other than Alec, I've seen them all many times and often enough been similarly taken aback. This night was pretty open. They played a few tunes - Straight no chaser and Footprints (on request) and Body & soul. Greg's guitar in B&S was a stunner (as he was for the rest of the night, blaring with overdrive or clear and rapid for solos or laying down modal colours behind melody or solo). But the major works on this night were not so ordered; maybe sketches of melodies but mostly open and improvised.

Miro and John were both in great form. I was taken aback by one melody snippet late in the night that came unison out of nowhere, but otherwise they were conversational when playing together or strongly independent when playing alone. Alec plays all manner of musics. This time, he was sturdy but quiet and understated. His solos took the band in a different direction, less brassy and outspoken, more quiet and meditative, often rhythm-based rather than lyrical, and I think it was his riffs that precipitated many of the changes in the longer tunes. And they were long: one lasted 32 minutes. But unmentioned is Mark. He was a stunner on the night, holding grooves but also enlivening with ever precise fills and polyrhythms. He observed after that his era has drummers holding the groove. Much contemporary jazz passes that responsibility to bass and leaves drums to percussive colour and cymbals. Horses for courses; all good. Mark was great. I've seen these guys many times, but they remain eye-openers, doubly so on a good night. John mentioned form stage that Canberra has plenty of good musicians. Let's hope it remains this way, but for now there's quality around, in jazz, other musics and all manner of other interests. Capital cities and academic centres are like that.