From songs of Argentina 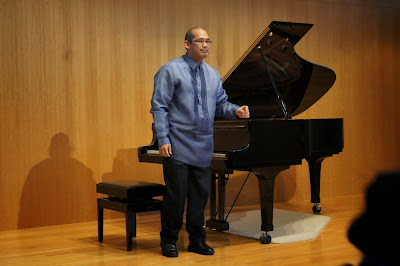 Dr Jovanni-Rey V De Pedro was playing a handful at Wesley with the music of Alberto Ginestera. This is music of the mid-20th Century. Ginestera was friends with Aaron Copland and studied in the US after WW2, in 1945, and published his first piano sonata in 1952 and his second in 1980. This was a veritable handful: great clumps of notes, chromaticism and serialism, changing meters, Argentinian dance forms reformulated, guitar-like arpeggiation. This was often frantic or at least hugely busy, unexpected. Jovanni presented his Danzas Argentinas Op.2 of 1936, then Doce preludios americanos Op.12, written while he was waiting to travel to the US. This was an interesting series of short pieces (30s-1m30s) exploring technical matters (accents, octaves, minor and major pentatonics), emotions (sadness, pastoral) and a series of homages to composers (Copland, Villa-Lobos...). Wildly different in effect but all dense and challenging. Interestingly, Jovanni-Rey suggested the minor pentatonic mimics the pan flute and the major pentatonic speaks of Debussy. That's one for the blues players. Then finally a more complete and cerebral piece, his piano sonata Op.22 in four movements, his first piano sonata of 1952. What a change when he encored with a mild Brahms. I didn't know much of Ginestera, but I certainly warmed to this complex and busy music and De Pedra played it with great energy and resolve and much good will. Wonderful concert.