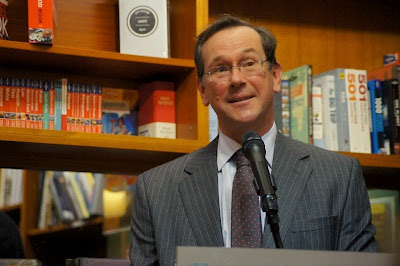 They are essential and central to the process of politics but they have a bad name. These are the professional political campaigners that Stephen Mills has written of in his book (The Professionals : Strategy, money and the rise of the political campaigner in Australia / Stephen Mills. Melbourne : Black Inc., 2014) and which he spoke of when he launched his book at Paperchain. He may have launched elsewhere, but it's appropriate there be a launch in Canberra, and apt also that it be in Manuka. This book is the product of a PhD thesis at USYD but it's also a product of Canberra and largely formed here, through interviews and other investigations. This is the story of political campaigning becoming professional and moving from state-based to national, from uncoordinated to nationally managed. Stephen outlined the main stages, from Labor's Federal Executive of 1915, Liberal's national secretariat of 1945, past Cyril Wyndham, Labor and the first paid political operative in Australia, the first marginal seat strategy of 1951, through funding issues and the first real national campaign, Mick Young's "It's time" in 1972, the first public funding, again under Mick Young and introduced by Beasley, through the alignment of policy with electoral strategy in the 1980s (I'll have to read the book to understand this one) and into the digital / social media age and microtargetting ("big data meets door knocking" with a threat of Big Brother). The core concerns of all this are to "centralise, strategise, fundraise". Are these developments good or bad? From voter-land, the message is disillusionment; but from Head office, it's seen to be working. After all, it's their role to win elections and someone does; the pollies can deal with the policy. I think everyone recognised the dilemma. Stephen suggested three remedial actions: changes to public funding, perhaps placing conditions on parties; implementation of an independent commission of leaders' debates; implementation of John Faulkner's proposals for spending caps. [Good first steps, but I imagine more might be required, and the whole schmozzle is a function of the electoral system, and that wasn't up for discussion here]. There were some questions. Is honesty and prerequisite and can we legislate for it? Apparently the High Court knocked down legislation attempting this in 1990. Marginal seat strategy. Stephen noted it was first used (not with sophistication) in 1951 and Bob McMullan has said "Nothing's changed" although things are better and new tools are used. Is party membership so important? No: policy is too complex for amateurs (example: a Labor member boasting that the white line on a beer glass in a pub was a result of a member initiative but things are mostly more complex than that); the role for members is different now. Stephen mulled over union membership requirements for Labor, but suggested a loosening of party discipline on crossing the floor may be more beneficial. Should parties contest every seat? The major parties have to for Senate implications and to show they are major parties. An interesting aside was that hardened rules for party registration may suit the major parties but may be going against the flow of history. All interesting. Then wines and cheese and chatter. I wondered if all this was a view from a 2-party system where someone must win; do the PUPs represent a real challenge or change or is it just another temporary factor? I also noticed some questions were Labor-oriented, perhaps from the location or the (assumed?) fact that Labor voters are more cogitant. The Jocks would just play the man and put it down to the lattes.

Stephen Mills launched his book The Professionals : Strategy, money and the rise of the political campaigner in Australia at Paperchain in Manuka.
Posted by Eric Pozza at 11:03 am

Hmm ... why wasn't I there? Perhaps, I suppose, because I was in Singapore. Still, I must speak to his wife who's in our reading group and ask why weren't we told. I knew he was doing his PhD in Sydney and had finished it but I'm sure we didn't know about the book. Sounds interesting ... we sure need something to change.