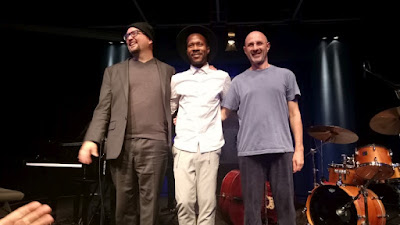 Bad Plus is a pretty big name and Blue Note definitely is. I got to Blue Note Milan (there’s a string of them now) to hear Ethan Iverson and trio, Ethan being the ex-pianist of Bad Plus. It almost turned out a failure. I’d booked from Canberra but then a family event almost interfered, but I made it. I had tried to change to the late show but that had been cancelled. The 9pm show was busy but not full. I was alone so it’s easier, but I managed virtually a front row seat. It was interesting to watch EI’s gentle, mellifluous hands and his various easy harmonic inventions. I liked that. Also bassist Joe Sander’s deliriously quick fills very so often right up the neck, and his singing solos and his otherwise solid walks. He has a lovely, interesting melodic and sequenced take on walks, obvious especially when they jammed a blues in F#, the key called by a young bassist sitting at my table at an audience invitation. Drums seemed fairly prosaic in this context although he’d played with the biggest names, not least several years with Brad Mehldau. But thinking further I felt a sense of time warp here. There was fluent harmonic interest and firm walks but I thought a lack of that rhythmic concern that’s been such an element of contemporary jazz. And the covers are not Nirvana now but Diz and Duke. Otherwise, all the band wrote tunes, perhaps riddlingly complex heads and driving walks or secret sambas or a floating dissonance or that improv blues. I was admiring of some very nice playing but a little non-plussed. Maybe it’s the day and the rush to get there. It wasn’t the beer; that was OK. So, nice playing and a genuine touch of NYC (they had left only that morning, early) but just not quite doing it for me this night even if the students on my table were ecstatic.