Bomb or no bomb 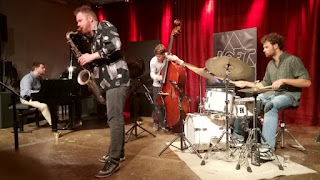 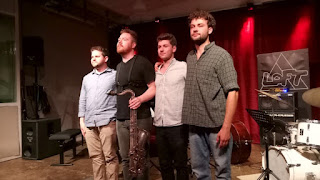 I've come to Cologne. It's Monday when the town rests but also the end of summer and music is not yet up for the year but I found a few jazz gigs. I missed one at a crossover recording studio cum live venue then I attended the Loft the next night and it too was setup for recording. I'm told it's run by the music community and it's venerable 30 years old and has made over 1,000 recordings. This night was a tenor sax quartet with a fill in pianist due to sickness, Billy Test of the NDR Big Band who was to leave for Paris the next day. The music was a mix of originals by tenorist Matthew Halpin and Billy. From the first notes I loved it. Matthew's airy and fluid but often speedy lines combined with the most deliciously responsive and leading comping and some exploratory piano soloing sat wonderfully over richly syncopated bass and reserved and responsive drumming. A great pleasure so I wouldn't have thought drummer Jonas hadn’t met pianist Billy before that night but that's jazz for you. Along with originals were several tunes by Carla Bley and a nice slow take in three on Never will I marry. The audience was just about 20 – too often the way in this jazz - and it was delayed by a particularly European phenomenon: the trains were running late because ww2 bomb had being found.