The glory of tradition 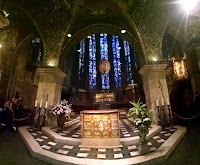 We were in Aachen, once the seat of the Holy Roman Emperor and one of the great sites of Catholic pilgrimage, so we went to Mass although not without some artistic attraction. This mass at 10.30 Sunday morning was at the Aachen Dom, one of the oldest cathedrals in Europe, constructed by Charlemagne who was buried here in 814. The attendance was not huge. We sat under the Barbarossa chandelier within the Palatine Chapel, the original Carolingian Octagon, under the Byzantine cupola mosaics. The mass was conducted just at the entrance to the attached gothic choir with its stained glass windows and collections of gold-encased relics. The Dom’s treasury has one of the best collections of religious art of this era, but that’s another story. The Chorus holds various works of gold and gems including the Shrine of Charlemagne and the Pala d’Oro, the gold encrusted main altar from which this Mass was conducted. And what a stunning work of traditional, assisted by it being in a language not understood. Not just the place, but this mass was sung, charged with incense and accompanied by organ at times, but also Mozart’s Missa brevis and rendition of Bach Jesu joy of man’s desire to accompany communion. The pipe organ was heard but invisible to us somewhere amongst the two galleries of the Octagon. We sat right in front of the string quartet with SATB soloists, behind the conductor, who performed the Mozart and Bach. There was some informality throughout, with a superbly constructed and presented homily with apt humour from the priest, evident even without understanding. The musos, too, needed some informality to adjust themselves. Their playing was lovely and sometimes superb and the acoustics were bliss. From the first songs of the Mozart, I was entranced. The Bach hit me with a sledgehammer with its superb simplicity when performed by quartet and solo singers. Just a dream. The combination of mighty tradition, religious commitment (despite the fairly casual parishioners), lofty space and aged decorations and Mozart and Bach were literally stunning. A deeply affecting experience.

Mozart Missa brevis and Bach Jesu joy of man’s desire were performed by SATB soloists and string quartet under conductor for a mass at the Aachen Cathedral. A pipe organ also played.
Posted by Eric Pozza at 4:57 pm