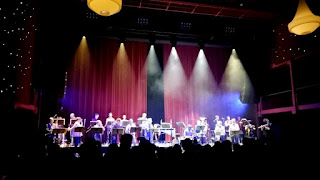 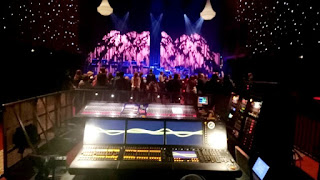 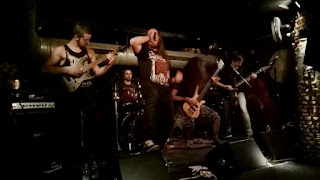 We went early for the final concert of the Patrimonoire series. This was in a famed Brussels rock/pop called Ancien Bruxelles. Dark, tall stand-at tables, a huge PA that had Anna, Canberra sound engineer and just back from a few weeks doing that at the Edinburgh Festival, drool. A 128-channel analogue desk; the best standard mics; large phased array; standard lighting desk. We both noted how clear the outcome was. And it was a fascinating gathering. Another ensemble from the Belgian National orchestra, a Brass ensemble, played to the left of the stage. To the right was Marockin’ Brass,a Berber/jazz ensemble playing Coltrane with diverse rhythms and non-Western scales with lots of busy syncopations to confuse the counters. Me too. I tried to count one and in the end realised it was four below with the most twisted polyrhythms above. This was good. Interesting also to feel the infectious earthy life (as evident from the nodding bodies) against the lively, carnivalseque, but essential intellectual classical players. I was a bit surprised with a really interesting jazz vibes solo from the classical percussionist and I loved the playful fat toned Marockin’ tuba (and contra-tuba? He switched to a one very large tuba for one tune). But a fabulous gig all round and evidently enjoyed by all the players.

There on to look for a beer and perhaps a band. We happened on a rock venue and the Death metal support, Epidemian. Too loud to stay for any time, but I was enjoying the head banging and especially the well played Warwick 6-string fretless bass. Never put it past the commitment of the metal community.