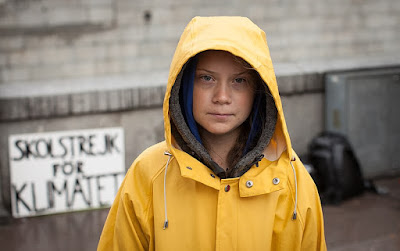 We’ve all been watching Greta Thunberg for months now. I jokingly say she’s my hero, but I seriously have immense respect for her clarity of thought and her speaking of truths and her steely commitment. Her first quote I recall was “I don’t want you to be hopeful / I want you to panic” and her message “I don’t want you to listen to me / I want you to listen to the scientists” is simple educated respect for our core institutions despite the time off school. Yesterday’s presentation to the UN similarly rang true: “We are in the beginning of a mass extinction, and all you can talk about is money and fairy tales of eternal economic growth”. But I worried for her. She’s young and on a big podium and she looked very stressed. We all need to stress for the position some politicians are putting us in, they being foolish or ignorant or corrupt. Increasingly, I think corrupt. As for Australia, the election speaks much of us. In that context, I am sad to have missed the recent climate marches. I was in Milan when the Paris march was held (20 Sep) and will be in Paris when the Milan march is to be held (27 Sep). That would be amusing if the issue weren’t so serious. Good on Greta and go the movement. He’s not the first to have expressed the sentiment, but as Gramsci said, what we require at this already late stage is “Pessimism of the intellect, optimism of the will”.