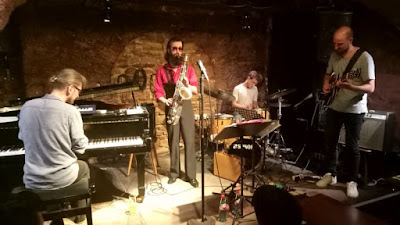 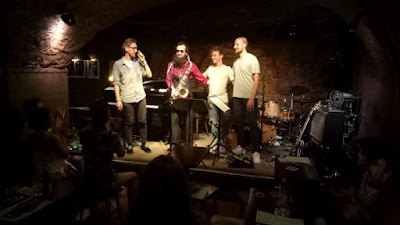 I'm just in Frankfurt in passing and my options for jazz were limited but still I was surprised to revisit a band leader at the Jazzkeller. It's a venerable European jazz club complete with signed photographs on the walls of jazz masters who have played there over the decades. The band leader was Peter Klohman, tenorist, who had played a string of gigs with different bands in August. All based on a style or performer, Eddie Harris or Rolling Stones or 90s pop or hip hop or Paul Desmond. I caught his band, Hard Bock, playing bebop but the music was far more contemporary. Billie's bounce turned into heavy funk pared to a few chords. Moanin' was more recognisable throughout despite harmonic and time shifts and straight rock drums. We all sang the Salt peanuts response as a communal sing-along that then dissolved into continuous breathing on sax and the deepest groove and that recognisable syncopation throughout on drums. Yardbird suite lost its turnarounds to become a three chord syncopated funk. Ornithology was all harmonic excursions on sax and piano and driving distorted guitar with the most delicious echo pedal losing time in the middle. Just four players with pianist playing keyboard bass. It was convincing. Obviously the reharmonization was written to support the convincing, contemporary improvs over the top. Very impressive. Strange to see the same leader in the same club on my return like my organ concert.