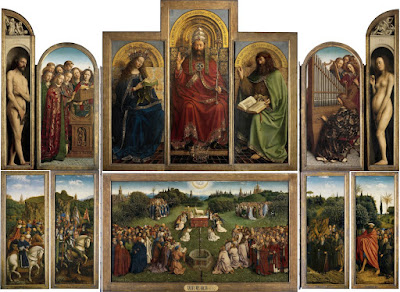 It’s the most renowned art piece in town and the feature of the Dom and it’s got an entry price for its tiny room with one item on display and it wasn’t even the real thing! I’m talking of the Ghent Altarpiece or Adoration of the Mystic Lamb or Het Lam Gods and it’s a C13th complex polyptych by the brothers van Eyck and it’s stunning but I was surprised to find the several panels, including the central panel, to be in the local art museum under restoration on public display. It’s fascinating to see the restoration underway and a birdcage for the two women carrying it out. No pics of that, reasonably. The completion of all panels is due in 2020 and a van Eyck festival will celebrate it, but it was a surprise. Maybe it was mentioned in the chattering audio guides or in the small display in the Dom, but I’d missed it. Also amusing was the justification for this one work being such a large part of the artists’ output. Only about 20 works are known and this is so large relative to the rest that it makes up 80% of the known output of the van Eycks. An amusing view. After spraining an ankle, my museum visits were limited, but I did see the Dom and the Het Lam version there and next day the Museum Voor Schone Kunsten, the fine arts museum dating to impressionism or thereabouts, paired with a contemporary museum next door. Not the greatest gallery I’ve visited recently, but any gallery with mediaeval works has me swooning, and there were a string of Breughels and a fascinating room of the history of portraiture, from mediaeval to George Gross, amongst more. In the face of a wobbly ankle, they were worthy outings.

Saint Bavo’s Cathedral in Ghent houses the Ghent Altarpiece (=Adoration of the ystic Lamb or Het Lam Gods) by Hubert and Jan van Eyck when it’s not in restoration at the Museum Voor Schone Kunsten. Thanks to Wikicommons for the Ghent altarpiece pic.
Posted by Eric Pozza at 4:30 pm