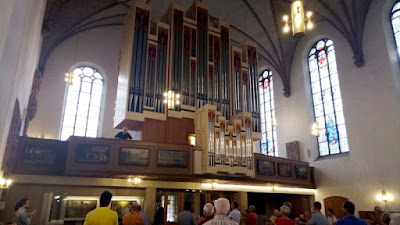 Organ concerts in churches are a common tourist pleasure in Europe. I know I've been to a few. One was St Katharinen here in Frankfurt where Martin Lücker played a few years ago. That was his concert no.3424. It's a few years on now and Martin was playing his concert no.3508 of Bach Fantasie C Major and Reger Symphonic fantasy and fugue and I was back. Along with about 150 others. These weren't tourists. This is obviously a regular outing for many frankfurters. The Bach was attractive but the Reger was overwhelming. The organ is big and loud and fills the bare, rebuilt space. Reger takes full advantage with ever rising lines of varying degrees of mania. Mvt.2 was some relief with perhaps occasional descending lines but then the climbs returned, excessive and fabulous on deep, loud organ pipes. An organist is frequently obscured or unseen up back in the loft. In this case he's even hidden behind another set of pipes. I thought it was loud so I tested with my phone. I was surprised to find loud passages measured just 75db , much the same as the background noise on the Boeing I'd just flying over on. If the app is accurate. I prefer the organ. But my other thought is Martin Lücker 's music reading. He's virtually played 2 concerts a week since 1985 and the music is not trivial and he plays the music capably and confidently. This is a seriously admirable skill. I am in awe.