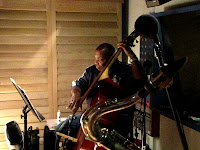 The ArtSound Radiothon continued with a special edition of Friday Night Live featuring the Monsoon Trio. The name’s new, although the members are pretty well known to CJ: James LeFevre, Eric Ajaye and Chris Thwaite. James is a great front man, confidently calling for cash for support from subscribers, and there were some promises made during the concert. It verged on the challenging and unknown at times, and perhaps not the popular singalong standards that appear in a normal telethon (think variety stars) but that’s not the ArtSound way. But we like liked it in the control room, and the band had a great time. There were some standards in the first set and a bit more adventurousness in the second. The standards included Alone together and Stella, some from the master Monk, Friday the 13th and Misterioso, and the lovely Beatrice, which seems to have recently grown in popularity around Canberra. James provided his ode to CJ Dennis, Triantiwontigongolope, and they played Miroslav Bukovsky’s gloriously tuneful Wanderlust number, Delicatessence. I love the chord-free sound of a horn trio, and this was a good example, open and clear. You need strong players so the chordal structure remains clear, and Eric and James did that perfectly capably, and Chris rang the changes equally clearly. A nicely relaxed concert rather than tempestuous, with an open sound and a good mix of tunes, and for a good cause.