It was a steamier style for Matt Thompson’s Organ Trio at the Trinity than I had previously heard at Moruya. Matt is not one to play screeds of notes or flourishes. It’s much more the deep, elusive interval or harmony that defines his approach to my ears, at least in the couple of outfits that I’ve seen him play with. At Moruya, his Organ Trio was particularly sparse. But Trinity’s a noisy venue, and there was a large group of people partying last night. Perhaps this brought out just a little of the mongrel in the trio. 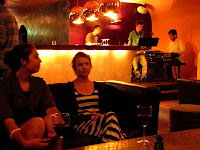 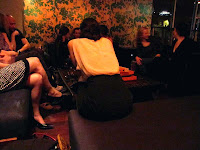 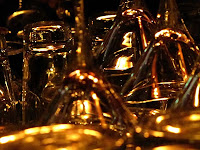 I caught the first set. I think it was Wayne Shorter to start then another favourite melody, but I didn’t recall the titles. Then a lumbering organ blues and ballad Georgia and Softly as a morning sunrise. I heard it as hotter than previous outings, but there were still moody, floating passages that sat waiting for crepuscular melodies. Early on, I noticed a satisfyingly solid swing from John, rich with precise accents and snaps and rolls, which harkened to the hotter outing. But always there was Matt defining the cool, holding back on careless ebullience. Max is a good choice for such an outfit. He’s thoughtful and considered, working the chords steadily and comfortable with considerable dissonance. He plays faster and longer lines as the solo progresses, but they have an inevitability that speaks of solo development. But Matt is the master of the calm and considered. This is theory parsed to the n-th degree. The sparsest of lines, the most minimal of solos, the most tangential of intervals, but there’s hidden harmony that beguiles as you settle in. Melodies that weave through the structure, often distant or perpendicular, as they resolve to the tune that you knew was always there but shadowed in the minimalist soundscape. It’s elusive and inscrutable and a bit baffling. But it’s not unknowable and I’m still coming to grips with it. This is a mature player with a developed and personal style that doesn’t divulge its secrets lightly. Quite a challenge, not least to me.