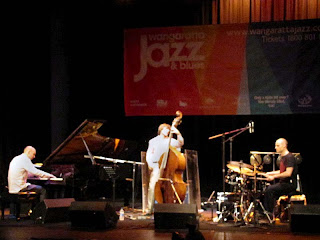 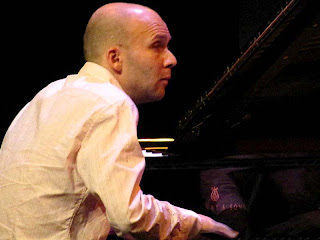 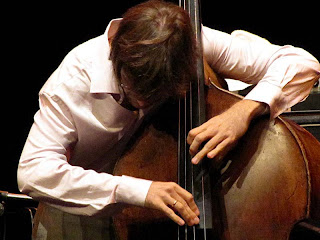 The Carsten Daerr Trio was a surprise for everyone. Carsten leads a piano trio in a new German jazz. I laughed when I read the writeup that said Carsten can read between the 88 keys. But seriously, this was an interesting modern band, playing rock and jazz rhythms, sometimes bordering on ambient, sometimes heavy 4/4 or 3/4 with busy snare rudiments and crossed rhythms and capable bass solos. And some oddities including little gongs and a pair of melodians. But they were enchanting and delightful in a way that serious Australian bands aren’t. These guys were obviously tickled pink to be touring. They smiled and joked and played on their lack of English (better than my German, of course), and brought the house down. Lovely to see such joy. Here’s an example. “You’ve heard us now, so there’s no need to buy the CD … but we played the wrong notes here … we picked them [so you should buy the CD]”. It doesn’t work in print quite the same, but believe me, they were treated as stars. Some good entertainment and personality goes a long way, even in a serious form like jazz. 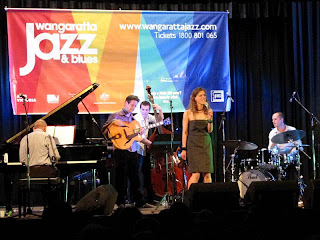 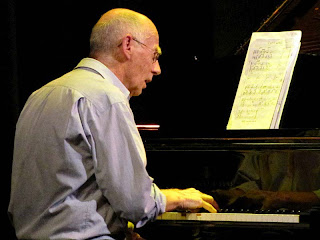 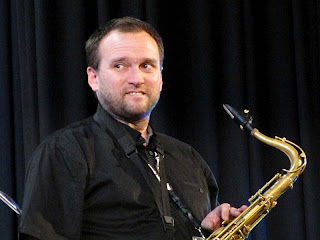 I knew what to expect from Kristin Berardi, but it still surprised me as fresh and honest and individual and wonderfully swinging amongst the heavier or freer sounds around. The delight of good swing struck me like a mallet. Kristen is wonderfully mobile with her voice, but also her songs tell of personal stories. I often wonder what it takes for a singer to share such intimate thoughts: her meeting with old Mr Johnson, the eyes of her baby son, the story of when she was dumped at University. But it was not just Kristen. She had a wonderful rhythm section and soloists with relaxation but class: James Sherlock, Mike Nock, Tim Firth, David Theak and some lovely duets: bass/vocal and guitar/vocal. This was invigorating and fresh swing, and reminded me of this staple of the jazz form. 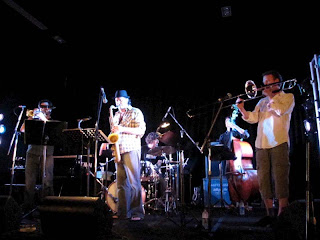 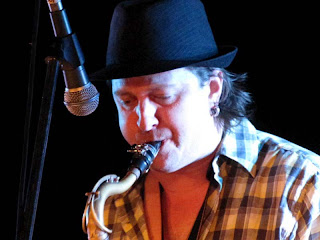 Ish Ish was a discovery to me. I’d heard the name, and knew the player’s names, but not the sound. And it was blissful! Bass, drums, and a horn front line of trumpet, tenor and trombone; no chordal instrument. They played wonderful solos and grooves, but the standout was the supporting horns. Melodies with accurately intoned three part harmony or unison lines. Then a solo from one or other of the horns, and sharp snaps or counterpoint lines contrasting the solo and building with its intensity. There was a humour amongst the players, but a deadly serious musicality, which is a disarming combination. A big band in 5-piece guise, and alive with vigour and anticipation. I wished there was more. Loved it.