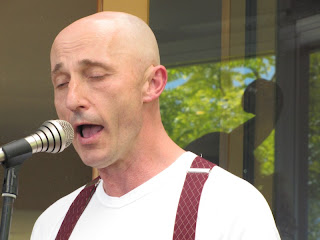 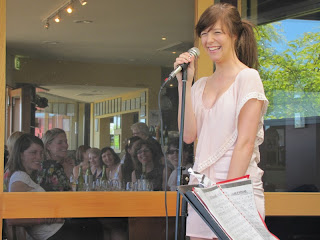 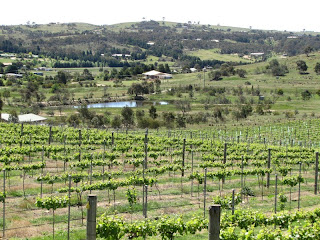 It was the Wine, Roses & all that Jazz festival weekend in Canberra where the local wineries book bands and everyone tours around for tastings. It was a gloriously sunny and warm day, and I chose the Brendan Drake Trio at Lambert Vineyards. I’ve known Brendan for many years but not heard him sing for ages. Brendan leads on vocals, somewhere in the baritone/tenor range, I’d guess. But such lovely tunes, the standards of the jazz era: The very thought of you, Angel eyes, Let’s fall in love, Lullaby of Birdland, Stardust, How deep is the ocean. All these tunes we know, with the words and seldom performed introductions that we don’t. And Brendan has a sense of that timing that Sinatra is famous for. It’s seldom that you hear male jazz vocals, and after today, I’m convinced it’s a shame. I loved his timing, but also the long and jagged intervals which seem to me the essence of this style. The deep voice, obviously deeper than the women, that makes those intervals ring with luxuriance. Brendan’s offsiders were stalwarts of the local scene that I’ve featured here often: James Luke and Paul dal Broi. The warmth was lovely as was the Pinot noir, but it was also Paul’s blissfully cool but richly and intelligently substituted playing that had me delighted. Bass doesn’t support the same level of harmonic adventurousness, but James played plenty of solos along with maintaining a rock-solid feel throughout. These are both capable players with stable grooves and flowing walks. What better for a Sunday afternoon at a winery? There was a sit-in too. One of Brendan’s ex-students, Alexa Miller, was there with a party group, and got up to sing Fever. The day was like that – eminently pleasant. And for those out of town, look at the scenery from the deck of the winery and drool.

Brendan Drake (vocals) led a trio with James Luke (bass) and Paul dal Broi (piano) at the Lambert Vineyard for Canberra’s annual Wine Roses and All that Jazz Festival. Alexa Miller sat in for one tune.
Posted by Eric Pozza at 5:29 pm