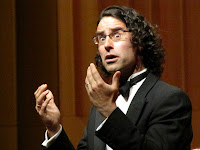 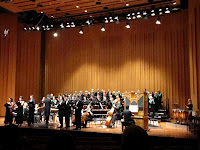 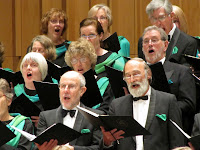 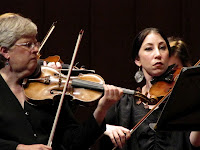 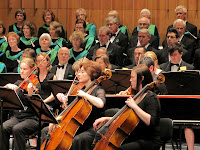 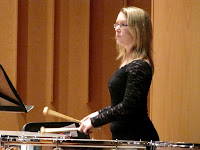 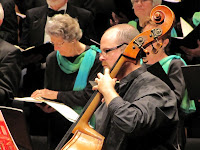 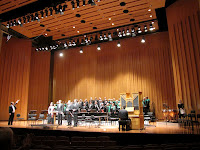 Thanks to Purcell for his fine, dignified music. Thanks to the Canberra Choral Society for a wonderful performance last night for Purcell’s 350th Birthday at the Llewellyn Hall. And thanks to ArtSound for the tix I won during the afternoon radiothon. We’d been thinking of attending, but in the end it was the prize that got us there and I’m so glad we went.

I love choral music, but this was not Beethoven or Orff or even Bach. It was a night of a little baroque orchestra with a wonderful, moderately sized choral group. The music is superbly dignified. I continually imagined myself in castles and palaces, or perhaps Westminster Abbey for the famed Funeral Music for Queen Mary. I noticed the music often moving in little phrases that were progressively mirrored by different voices or instruments, often rising in pitch, sometimes seemingly indefinitely. They were simple phrases, but of melodic purity. The brass rings true to the era, and the strings get a minor and much simpler role. The words are in English. I could pick some, banal to our ears: “Sound the trumpet”, “Strike the viol”; but also the heart-rending “Remember me” from Aeneas to her lost love, Dido.

These were Purcell masterpieces, apparently, starting with the Birthday ode for Queen Mary, through Te Deum, King Arthur, some songs, and Dido and Aeneas, to finish with the Funeral march for Queen Mary. There were six soloists. I particularly noted Tobias Cole (countertenor) for his strength and purpose of vision, and Karen Fitz-Gibbon (sporano) for her similar purpose, but also for that soaring, crisp voice. It was not all perfect, but this is an non-profit group presumably with amateur chorists, if not instrumentalists and soloists. I noticed some uncomfortable spots: soloists rushing or occasional uncomfortable harmonies in the orchestra or choral balance (common problem: too few men in choirs). And I didn’t like that baroque organ hiding the so-important brass. (The poor brass have a hard time in fine music: they are forever waiting to play in classical, and when they get their opportunity in baroque, they are hidden). But I was stunned by the beauty and clarity of purpose and we were taken back to another era that truly felt different. Just listen to the dolorous dignity of the drum processional for the Funeral March, and the pained majesty of following brass march to feel this splendour. Wonderful!

The Canberra Choral Society presented Purcell” a 350th birthday tribute at the Llewellyn Hall. Peter Pocock coducted; soloists were Sonia Anfiloff, Karen Fitz-Gibbon, Tobias Cole, David Yardley, David Mackay and Benjamin Connor. There was an orchestra of 25 and a choir of 71.
Posted by Eric Pozza at 1:29 pm