The National Jazz Awards this year were for the sax – tenor, alto, whatever. I heard little of them, other than the final three players performing their grand final sets over ABCFM as I was driving back to Canberra. It’s interesting how different people hear things differently. But firstly the formalities. Ten players, whittled down to three for the final performance. These were Zac Hurren, Jacam Manricks and Phil Noy. They were backed by Sam Keevers (piano), Phil Stack (bass) and Ben Vanderwal (drums) and judged by Mike Nock, Julien Wilson and Jamie Oehlers. My order was: 1. Phil Noy, 2. Jacam Manricks, 3. Zac Hurren. I liked the technical clarity of Phil and Jacam, Phil’s emotional honesty, and Zac’s individual style. The judges found: 1. Zac Hurren, 2. Phil Noy, 3. Jacam Manricks. 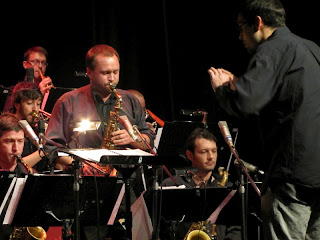 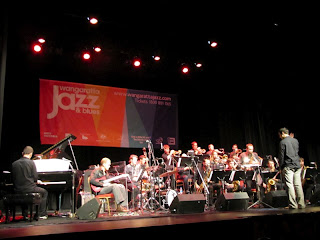 Jacam Manricks also appeared at the National Big Band Composition Competition which was held this year at Wangaratta. The other finalists were Andrew Murray and Joseph O’Conner. The Jazzgroove Mothership Orchestra presented the three compositions and the judges were Mike Nock, Evan Lohning and Dave Panichi. Again I got it wrong (or at least got a different result from the judges). My pick was: 1. Jacam Manricks, 2. Andrew Murray, 3. Joseph O’Conner. The judges gave it to Andrew Murray.
Posted by Eric Pozza at 7:14 pm