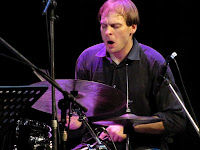 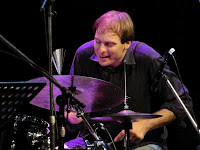 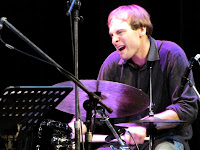 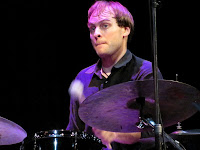 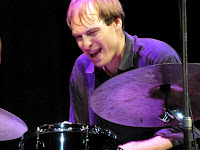 There are vibes around a few players at every festival. Linda Oh gained vibes during the festival, but Ari Hoenig and his offsider, Gilad Hekselman, arrived with them and didn’t disappoint. You could guess they’d be stars, given the support band as Australian heroes of their instruments, Jamie Oehlers and Sam Anning. I new the names but my jazz school mates were ecstatic in anticipation. Best soloist ever; best drummer. I could see from the start the best drummer, but I’m still considering the best soloist category for Gilad. But there’s no doubt these are guys at the highest levels. New Yorkers, both, of course. Ari is a powerhouse. He can set grooves that are confident and true to type: rock grooves, jazz grooves, funk grooves. These are not approximations, but the real thing: heavy and solid and determined, or light and lithe and delicate; whatever’s required, I’m convinced he can do. He communicates with his fellow players in a way that make you feel you are imposing on a relationship, it’s so true. I felt this with Gilad, where accents and changes of dynamics were instantaneous and perfectly in synch. Then those solos. He’d take a concept and dissect it in numerous, ever inventive ways, with the oddest of parts, perhaps 7 or 11 or just 8, and the cleverest of rudiments, but always with precision to die for and endlessly moving to the next. The precision showed up equally in dynamics. One minute, he’d worked up to intensity and rock punchiness, then from beat four to beat one it was ppp and the gentlest and most perfect of lullaby rhythms to put your baby to sleep by. His face expressed it all. Ever mobile and in touch with his fellow players and signalling one thing or another, or just observing. For Gilad and Ari observed, frequently, regularly, and you could see the result in their playing. 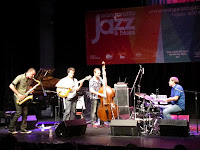 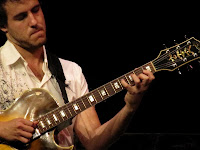 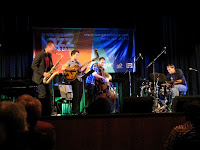 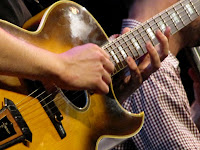 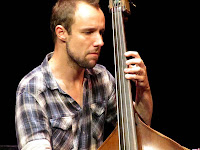 Gilad seemed firstly to me to be equally precise, but with a West Coast or ECM guitar clarity that I found too cool. And his early solos were tonal, fast but essentially folkish, I thought. My mates looked on in disbelief so I knew I had to think more on this. Through the next two concerts, there were solos that blew me away with complexity and speed and precision and alterations, so this was not just the simple melodies of folk, but I’m left still somehow unaffected. A master, of that there’s no doubt; but perhaps too cool, too precise. Strange, because I didn’t feel that with Ari.

The pair played with local heros, Jamie Oehlers and Sam Anning. Both are stars of the Australian jazz firmament. Jamie was flying up and down the octaves with mellifluous and lightly formed notes, and Sam was solid and in touch and capable in his soloing. But there seemed a disconnect somewhere, and I felt it in the last set when they played a blues. Gilad played a basic blues-guitar style, which was very different from a jazz blues. Think that folk simplicity that I’d heard on the first day. I thought, this is not a limitation of technique (none there!) but an exploration of style. Ari’s readiness to move styles – funk, blues, rock, jazz – fitted with this toying with styles. Jamie played his solo, and it remained in a jazz, post-Trane style. Gilad was playing these big, ugly chords in rabid contrast and I was wondering why. He probably hadn’t articulated it, but I thought these ugly intrusive chords were a demand to play the other, to put on a mask, to enter this ironic world of styles and fashions and relativities. Now, I’m not denying anyone’s capabilities here, but I felt here was a mismatch, and it was not around technique, but musical conception. On one side, the earnest modernism; on the other, the ironic post-modernism. Perhaps not conscious, in fact probably not conscious.

This evening before writing this piece, I looked at YouTube for a video of Ari. I found Ari and Gilad and a bassist, seemingly doing a workshop somewhere. The bassist was toying with his bass, spinning it, playing with it. Everything that an earnest jazz bassist doesn’t do. This was the giveaway to me. So, fabulous playing all around. Three eye-opening concerts, and drum solos to die for and to remember for posterity, and guitar lines that shred the octaves and harmonies. Similarly, sax solos of endless energy and capability. But essentially also a mismatch somewhere that limited the whole from being the great.

I’d like to hear what you think, if you were there… Just add your comments below.

thanks for the reviews!
that video you youtubed actually has joe martin on bass playing around with his bass. Pretty much one of the heavier guys in NY. his latest album has chris potter and brad mehldau on it. check him he's the goods

Thanks for the comment - much appreciated. I'm listening to Joe Martin now on Youtube with Kurt Rosenwinkel. Thanks for the advice. Eric