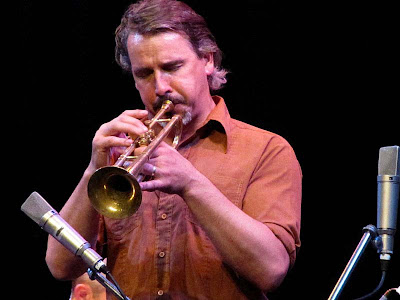 There were several performances that I would place in the free fringe at this year’s Wangaratta. Difficult, richly improvised, music lacking in obvious form, and with a tendency to extremes of volume at one end or the other, and long crescendos and sustained cacophonies. I hear ambient, but I think the practitioners name it otherwise. I think Necks, and there was something similar in Band of five names. What interested me was the thought that they were educating us to listen: taking sounds and making them art. Perhaps the clunking of strings on a guitar, or an odd mallet on skin, or air blown through a trumpet without forming a note. There were spots of wonderful technical capability too, although I imagine some of a festival audience wouldn’t have noted that. I was astounded by a wonderful extended trumpet passage that weaved through key centres at one stage, and drums that were heavy and steady as lead (I imagine from Simon Barker’s Korean influences) and some simpler but precise piano tinkling that was so, so bell-like, with a purity beyond any Rhodes sound I’ve heard before. This was Band of five names, oddly featuring just four players, although expanded from the original three. 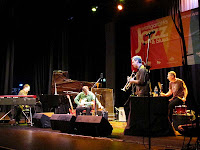 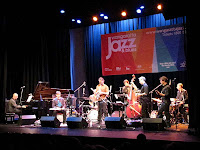 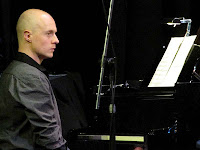 The Australian Art Orchestra was in related territory, although I reckon there was more form written but none too obvious. Again, difficult and demanding music and played with a high level of seriousness. Again, featuring a trumpet tonality. Scott Tinkler led the Orchestra in an extended piece he calls Folk. Folk is dedicated to, and images, folks he knows, seemingly mainly the music scene. From the top we realised there were two drummers, two trumpeters, two guitarists, along with bass and piano: an uncommon line-up. I was taken by passages of piano and trumpet virtuosity. I found the sound effects hard to take at times, but perhaps they were required. Guitars with various effects and the introduction with trumpet played into water for that unique bubble mute tone. I jest, but this was serious. I loved Marc Hannaford’s modern classical piano stylings, and the comparison of the two trumpets was fascinating. Scott Tinkler and Phil Slater are both renowned Australian trumpeters, but they sound and play so differently. I was particularly stunned by Scott’s long and sinuous lines at one stage: endless and virtuosic. But it was a hard one for the punters and plenty didn’t manage the distance. 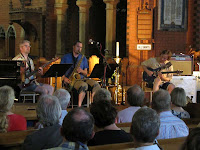 I just caught a few bars of another ambient concert by Fallingwater Trio. The Sax sang lyrically in the reverberant cathedral space while the guitar and bass held a 7/4 pattern. I didn’t give them time to stretch, and ambient needs time.

So three dreamy, ambient concerts. Demanding of a meditative poise on behalf of the listener. Worth the time if you can achieve that. And educational to boot!