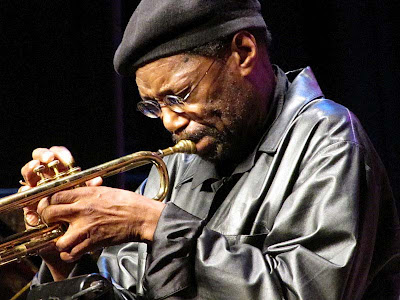 Charles Tolliver is not a household name in jazz, but he’s a living connection to a great era of hard bop from the sixties, having played in small and larger ensembles with the likes of Jackie McLean and Max Roach. I’d heard a few albums of his, and enjoyed the infectious tunes and lively playing in the smaller bands, and the outspoken energy and thrills of the larger formats. Charles led the Jazzgroove Mothership Orchestra for two concerts of his music, then a small band for a final performance. 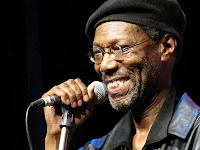 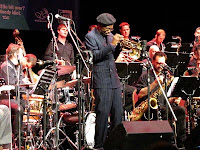 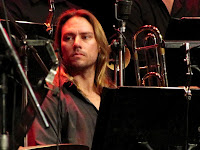 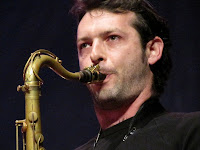 The big band concerts were brash and loud and exciting, as they should be. Charles presents quite a forceful personality as a leader, with incisive gestures and clear indications. The horns responded well and played admirably in ensemble. Charles likes the effect of high trumpet notes, so these were not easy charts. I found Evan Mannell a powerhouse on drums, playing wonderfully apt fills and pushing the energy levels. This music demands commitment and lively outlandish involvement, and Evan fitted the bill perfectly, even at the second performance which was early Saturday when he seemed a little the worse for the previous evening’s wear. I felt the piano and guitar were too cool and didn’t really work in this context. I couldn’t hear the bass. The horns seemed to be working hard on the solos, but the mix was such that we missed the effort, at least on the first night. It was better on the Saturday morning. So these were two worthy gigs, although with some problems for me. 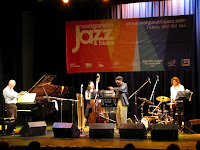 Charles played a small ensemble set for his third performance. It was as much a blow as a performance. It wasn’t a particularly well rehearsed outfit and the charts were Tolliver originals but they were good musicians and they carried it off perfectly well. Charles again led the band with instructions all round, especially to drummer Tommy Crane who normally plays a more fluid, coloured style than hard-bop. Linda Oh blew everyone away with wonderful solos and eminent concentration, but eventually relaxed and had some chuckles with Charles. Mike Nock gave a modern, modal twist to the performance. It was outside the tradition, but it fitted well and was a revelation. I remembered several charts from Paper man, a small band album Charles recorded in 1968 with Herbie Hancock, Ron Carter, Gary Bartz and Joe Chambers. Charles is not in his earliest days, and there was some struggling on the fast lines, but the performance still lifted the room and thrilled. These are certainly infectious tunes.

Charles Tolliver is a real link to hard bop in its prime, and was a pleasure to hear in the flesh. Charles Tolliver (trumpet) led the Jazzgroove Mothership Orchestra in two performances. He also led a small band with Mike Nock (piano), Linda Oh (bass) and Tommy Crane (drums).
Posted by Eric Pozza at 1:25 pm