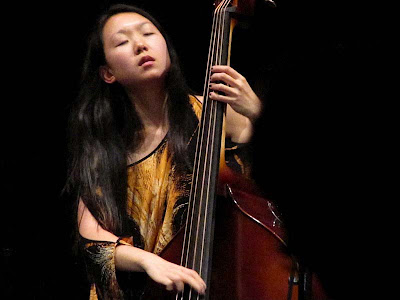 Excuse the pun, but I couldn’t bring myself to not use it. It was unexpected, but I managed to catch New York-based Australian bassist, Linda Oh, three times this weekend. A concert at the Band Room at very short notice, and two gigs at Wangaratta. Thus Linda Oh x 3 = O3 = Ozone. We may have repaired the Ozone Layer, but Linda remains a challenge, although in the most intellectually and emotionally pleasing way. This woman leads a trio with rabid energy and a bass style that’s hugely busy and mobile and all over the fingerboard. It’s a stunning technique. It took few outings to understand better what she’s playing. On the first I thought I heard heavily altered scales, although a jazz school mate suggested it was more sedate arpeggios and modes. Listening again, there were tunes based on repeated descending chords, some diminished structures overlaid, multi-octave arpeggios and harmonics and runs and chromatic leading notes. But it was not just the tonalities but also the sheets of notes that thrilled. The frequent bass solos punctuated complex melodies over tonal centres, her left hand reaching to the dumpy thin high notes, right up to the double octave, frequently slashing at double time from deepest bass to the highest notes with control and pitch and astonishing speed. 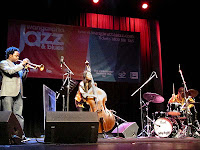 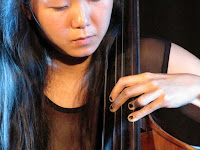 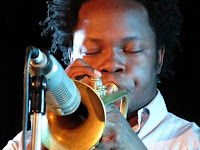 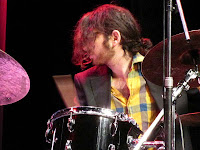 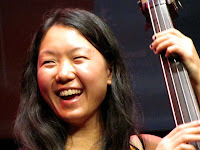 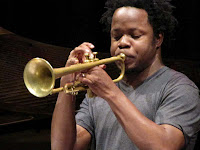 Her melody offsider, trumpeter Ambrose Akinmusire, seemed tame next to such an outspoken bass style, but it was a very satisfying contrast and he played with individuality and passion. His was a more tender, restrained style, but rich with a trumpet history and inflections that I think of as New Orleans, breathy interludes and squeezed notes, sustained intervallic exercises, thoughtful and careful. It was on edge, too, with little fluffs becoming part of the performance, so there was honesty there too. But then they were playing to a jazz school student crowd who they had the workshopped that afternoon, so they were amongst friends. All this was at a restrained volume, which I don’t expect for such music. The second gig to a festival audience less relaxed, more formal, and I felt it was stronger. The third was their last, and they seemed concentrated, but more comfortable, playing to an audience they knew and admired their playing. Linda’s trio was widely seen as a standout at this festival, with good reason. Drummer Tommy Crane was similarly thoughtful, head down and concentrating, rolls and cymbal patter and rhythms expressing the melodies and pushing the frantic business. He too seemed stronger in festival gigs, although brought back to a more earthy level by Charles Tolliver to fit his musical style. I heard the trio’s original music as busy and modern, perhaps harking to experiments of the sixties: difficult music with no space for laggards. I think Corea’s Now he sings… era with bassist Miroslav Vitous: the sound was similar, as is the busy bass. Not easy, but accessible with concentration.

I actually heard most of the band four times, but the pun was too good not to use. Linda Oh (bass) led a trio with Ambrose Akinmusire (trumpet) and Tommy Crane (drums) at the Band Room, ANU and twice at Wangaratta Jazz Festival. Linda and Tommy also played a quartet set with Charles Tolliver and Mike Nock, but see the Tolliver report for that one.
Posted by Eric Pozza at 7:00 am