A return and an end 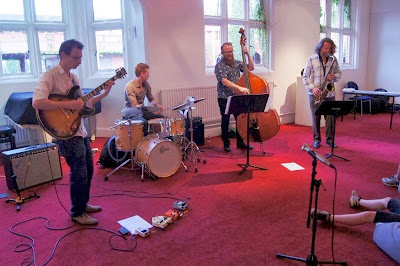 Daniel Hunter played the last concert in the Canberra Grammar Gallery jazz series. And what a wonderful little concert, well attended and well played. Daniel is back for a visit after leaving for Europe around 6 years ago. He’s been in Paris for the last 2½ years; I think it was Geneva before then.

I heard him once interviewed on the Net by French radio. He tells of playing the boisterous and hot Parisian jazz scene. I remembered it for seeing an uberhot bassist, Hadrien Féraud; Daniel’s played with him. Small world when you’re in a world centre. He returned to play with old friends: Phill Jenkins, who he’d played with over the long term; Aidan Lowe, a few years younger, who he’d met through Phill and has had his own European jaunt; John Mackay, teacher, mentor, blasting saxist admired by all. The tunes were all composed by Daniel and many were from the CD he was launching at the gig, called The Twentieth, for the 20th Arrondisement, Paris, end of the spiral. I heard Scofield often enough; that was easy. I was not so sure of his other influences, Jim Hall or Kurt Rosenwinkel. Phill was lanky, simple, beautifully toned, studiously steady. Aidan was aware, volume controlled, varied and rich in fills and colour. John was a blast and fresh with the new tunes; world class, thrilling. Daniel was a little muted in front of family and friends, but extensive in solos, stunningly toned with Fender valve amp and overdrive and a touch extra distortion for some solos passages, and nicely varied and coloured in comping. These a tunes worthy of a another listen, contemporary and instrumental and busy but tonal. It was a worthy concert to end the series and a nice opportunity to catch up with Daniel after some years away. I’ll expect to report again in a few years time. And here’s a pic of Pauline getting thanked for running the series.

Daniel Hunter (guitar) led a quartet with John Mackey (tenor), Phill Jenkins (bass) and Aidan Lowe (drums) at the last Canberra Grammar Gallery concert and the launch of his new CD, The Twentieth.