The Kiwis have it 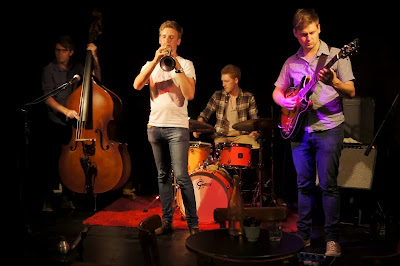 It was a Kiwi-Canberra connection when Tom Botting and Peter Koopman (NZ via SYD) joined Alex Raupach and Aidan Lowe (CBR) as the opening band for the Smiths Jam session last Thursday. They had got together just that day, playing a function in the afternoon and then a few standards along with some compositional sketches from Alex in the evening. I arrived to a dumbfounding solo from Tom over my favourite, Alone together. Then Out of nowhere (another classic) and Skylark. Out of nowhere was medium swing, but this band subverted it, so walks became sparse and truncated and intervallic, rapidly moving from thumb to first position, and Peter shredded the tune with long passages and odd phrasing way off the one and a NYC feel that made me think of Kurt R. Dead steady and serious business. Alex was his best, more bop-oriented than Peter but moving phrases against barlines and flattening endings and often enough in between. Aidan seemed a touch more restrained in this company but perhaps not on latin or swapped fours. Swapping sixteens and eights seems outré for a contemporary outfit like this, but the historical references are still there. The whole band was feeling its way on Alex’s sketches, but the skills were stunning. Jocie Jensen sat in at jam’s end for some stunning takes on Round midnight and It could happen to you. Her scat and unison heads with Alex and high and accurate voice fitted this choppy-rich band perfectly. Mike Dooley sat in for a run of tunes, including a funky Nature boy and some boppy takes on Green Dolphin Street and the like. Mike’s feel is more bop-hot with some classical reference so these were interesting intersections of eras. I sat in for a few tunes as did drummer Mitch Preston who is so strong in the local blues scene. This was a stunning end to a rich night of jazz in Canberra. A blast with some stunningly capable and informed chops. Just to finish off, here’s a quote from Nick Dooley, Mike’s brother and once a trumpet teacher at the Jazz School. It’s out of context here, but wise advice: “It’s hard to be exciting rather than excitable in a band”.
Posted by Eric Pozza at 4:47 pm