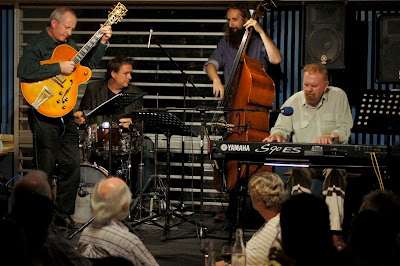 Ross Clarke played a tribute to Oscar Peterson at the Gods. Ross introduced OP as modern in his time (late ‘50s) and popular but not critically acclaimed and commented that you could find his records in the stores. I remember a time with OP and Ray Brown and that mainstream pianism. It’s infectious, entertaining and deeply swinging. The National Library had a Yamaha midi-driven grand piano that was playing OP for a week a few years ago.

What excitement it was to see those keys moving! Ross wasn’t quite at OP’s level, of course (who is?) but this was a joyous concert with the same feel of release and pure melody and glee in it all. This is 50 years ago now, old times and not too harmonically or melodically challenging, with tunes like Reunion blues, Cold duck time, Blues for Gene and C-Jam blues. Also standards of somewhat greater complexity, Green Dolphin Street, Con Alma, In the wee small hours of the morning, What is this thing called love. And a few I didn’t know, Lee Ritenour’s New York Brazil, apparently recorded with one of my favourites, Dave Grusin, and another original-cum-arrangement by Ross based on the theme from Michael Palin’s film Brazil. All melodic, joyous and emotionally uncomplicated. The band did their part, too. James was a monster in solos, admitting later to borrowing bass lines form Ray Brown and Christian McBride. Not unimpressive stuff. Mark was sharp and tight and exciting in his own solos. This is music of solos. It seems like it exists to feature melodic chops between heads. Mike was nicely clean and bluesy in his solos, and sometimes chordal. Ross did his own capable job on Oscar. None of this is too deep, of course. “As deep as the ocean” would be deceptive if they’d played it, but it was entertaining and ripe for the holiday season and Australian summer. A lively and happy and comfy end to Geoff’s Gods series for 2013.