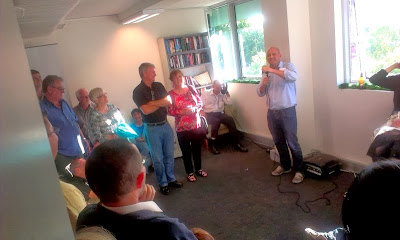 The Australia Institute’s Christmas party was on its home patch, in its own offices in Civic. It’s interesting to see how small an operation it is. Just about 12 staff, producing 27 research papers, 292 radio/to interviews (speaker Richard Dennis was interrupted for one), 92 OpEds, Facebook friends and Twitter followers and the rest. So they are a productive little outfit. But what most impressed me, and a newcomer mate who came on the night, was their practicality and democratic ethics. Richard is clearly responsive to the situation but also honestly responding within our democratic institutions. So influencing, convincing, imagining are keys to messages. There’s a recognition of the recent electoral loss, of the poverty of debate and media interrogation, of a likely loss of carbon pricing and mining taxing. There’s a ready curiosity around what the new Senate will bring us in July. Dreams are irrelevant: “we got the politicians we got”. Practical, but also ethical. Engaging in debate. Providing themes but not obfuscating or misleading or descending to vapid slogans. Good on them. I trust this wins in the end.

So what items to note. Parliamentary control can also lead to problems. Who knows what this Senate will bring for Abbott. Barnaby Joyce crossed the floor 19 times under Howard and now he’s a Deputy Leader. What are the implications for the Coalition in hard times, given that Liberals represent the richest seats and National represent the poorest? This has been a rollercoaster year with three PMs and yet Australia remains steadily democratic. This is something to cheer about. It’s possible to reduce carbon without carbon pricing but “why would you do it the hard way”. And humour: “economists sometimes are people”. You can set themes going and win over time; it takes “3 years to shift a debate”, viz, TAI’s National go home from work on time day or Affluenza as a concept. Imagining is important, so comparing Foreign aid expenditure against pet food got TAI on 60 minutes. What of Turnbull? That’s a “very real prospect”. On par for child care workers: Does money matter? The Boss says yes, but “I wouldn’t want people caring for my kids to be motivated by money”. On TPP, it increases corporatisation of Australian democracy. It binds a parliament, even though constitutionally no parliament can bind another. 85% of Australians want it public before it’s agreed to. The “entire US strategy is about IP”. There were a few questions that I missed.

It was just an informal end-of-year chat but it was riddled with thought and clear democratic ethics. Good on TAI. All done on the proverbial oily rag, too. The Australia Institute had their Christmas part in their offices. TAI head, Richard Dennis, spoke.
Posted by Eric Pozza at 9:55 pm