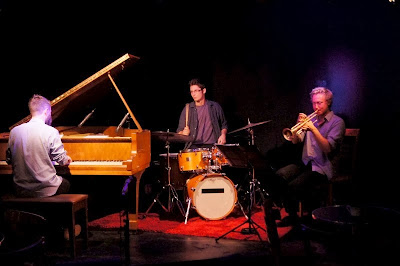 Grey Wing Trio sounds mysterious to me, meaning it gives me no hint about what to expect. Luke’s invitation to the gig mentioned a blend of “simple fold-like melodies, jazz elements with epic textural adventures”. Perhaps Grey Wing suggest folk-like melodies, or even winging it or epic flights. It was all these.

Luke showed James and me the charts after the gig and they were mostly single notes, lines for trumpet and both piano staves. And extensive. The first set was one medley-cum-tune. Melody breaking off to free or solos or other times. One hour; one piece. It’s daring music with lots of space to fill or flounder in, but these are very polished musicians. It also leaves openings for being lost, or at least not returning easily, but messaging and glances worked well in this outfit. This was comfortable, the changes fell together, the melody appeared almost mysteriously accurate and together. That really impressed me. I liked the melody, but I loved the escapes into free. Luke’s so comfortable at free across all seven octaves, moving chords, changing harmonies or single note flourishes. Ken’s trumpet is controlled, his volume restrained, his tone scratchy, but like wet sandpaper rather than abrasive. I part5icularly enjoyed his scalar lines that would switch chords on a whim. Lovely and unusual: this was controlled performance with unregulated harmony. And Finn has a similar iconoclasm, bringing all manner of tones and rhythms form his kit and percussion, explosive then floating, just once or twice dropping into a rock rhythm. They played two sets, each with no break. The first was 60mins, the second 40 mins. And this was intriguing and impulsive and, yes, epic. Great stuff. Grey Wing Trio comprise Luke Sweeting (piano), Ken Allars (trumpet) and Finn Ryan (drums) and they played at Smiths.
Posted by Eric Pozza at 9:42 pm