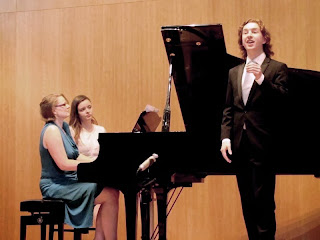 Kimberley Steele presented another of her concerts at Wesley, this time with two very different streams: baritone Alexander Knight and cellist David Pereira. Alexander took much of the program with his big voice. [I was near the stage as they were warming up and this voice was huge! Who needs amps with a trained voice around]. Alexander was singing a range of art songs, from Rachmaninov and Schumann and Vaughan Williams, but through to some more obscure names like Gerald Finzi, George Butterworth and Dilys Elwyn-Edwards. I think Finzi was my favourite with more modern malleable harmonies and words form Shakespeare. Schumann was my least favourite. Perhaps because of his fame, he seemed predictable and the foolish nationalism and boy-war-wonder of the Two Grenadiers put me right off (I’ve just finished Farewell to arms and All quiet on the Western front so I’m now distressed by the war is great / Great war meme at the moment). His I bear no grudge also annoyed me, seeming to be more grudge bearing in musical presentation than not. Kimberley’s inclusion of the Elwyn-Edwards was a great remedy. Trust a woman’s sense. It was a song sung at her wedding and was vastly different to the Grenadier’s view. Perhaps the encore was somewhat the same, if from a bloke’s POV. It was one for the rum drinkers and Alex performed it with humour and grand operatic gestures. Fun. 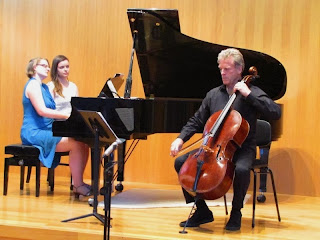 The other part of the program was very different. David Pereira joined Kimberley for a rendition of Chopin Sonata for cello and piano in G minor. Chopin wrote it very near his own death, but it was not maudlin. Despite Chopin pianistic flamboyance, this was a work of joy and seriousness and unpretentiousness. Four movements over about 30 minutes. A very real pleasure with wonderful playing on both parts. I’ve heard David at two recent concerts and this one was particularly intimate. This was confident, firm and informed playing. I can understand his reputation.

A very enjoyable concert of two very different worlds. The outspoken verbalisation of voice with baritone power and a similar range in strings held together by Kimberley’s empathic piano One image returns to me here, when voice set the tempo and piano followed with wisps of notes. I think it was in Rachmaninov The Isle. Quite beautiful but also perfectly responsive and coherent. Another memory will be the wonderfully colourful image from poet Housman put to music by Butterworth: “feather head of folly”. Perhaps out of modern times, but amusing.