Bringing jazz to the concert hall 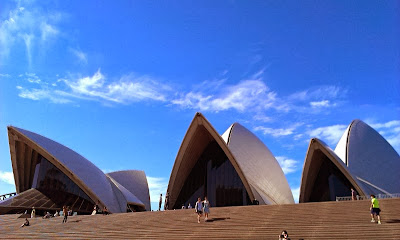 This is a jazz site so a concert by the Sydney Symphony Orchestra entitled Jazz inspirations is a must, even if it’s in the Sydney Opera House. Sydney’s somewhat a suburb of Canberra these days, given the easy drive, or perhaps it‘s the other way around. Megan and I did one of our day trips. The program was Shostakovich Gershwin and Prokofiev with the jazz theme. I was intrigued. The Shostakovich were three little numbers, more Palm Court Orchestra than jazz, but cute. They were a waltz, a polka and a foxtrot. The players were (left to right) piano, bass, banjo/slide guitar, violin, soprano, alto, tenor saxes, glockenspiel, trombone and conductor. More bass pizz from classicists that you might expect. The odd banjo sound, which placed it in US country as well as ragtime, especially given one slide guitar solo. The violin was all heavy vibrato and intimations of gypsy jazz. This was cute music with melody constantly moving between instruments. Attractive and cute and I reckon I’ve heard some before, in films of other.

Second was Gershwin Piano concerto in F. I got the feeling there’s some dismissiveness in the classical community around Gershwin being serious. (“Classical crossover goes both ways when Dmitri Shostakovich dabbles in jazz and George Gershwin tries his hand at ‘serious’ music” / SSO website http://www.sydneysymphony.com/production-pages/2013/concert-season/thibaudet-plays-gershwin.aspx viewed 8 Dec 2013). We chatted with two women after and their favourite was Gershwin (mine was the Prokofiev). The notes say that critics observed “structural deficiencies” and that there’s “not much development” and a certain amount of repetition but some “highly effective melodies”. All obvious when you’ve read the notes, and true. I loved the melodies: fabulous and effective as Gershwin can be. I felt it was a simple work, lots of American ebullience, great swells, whole sections playing melody together. I enjoyed it immensely, bathed in its luxurious lyricism but I could see it’s a different beast from a classical construction. Lovely but different and not so complex. The pianist was Jean-Yves Thibaudet. He’s a renowned pianist with many recordings to his name including Gershwin arrangements for the Paul Whiteman. He encored with a take on I’ve got rhythm, presumably the Ferde Grofé arrangement for Paul Whiteman that Thibaudet had previously recorded. Like much jazz/classical crossover, I was a bit troubled by the sense of swing, but otherwise these guys have chops (to use jazz expressions).

My favourite of the afternoon was Prokofiev Symphony no.5 in Bb Op. 100. It’s a good jazz key but also a “sort of Soviet-style blues or Muscovite one-step” has been found in the second movement. It was also written in 1945 so expressed joy at the end of the war and wariness of Stalin, and this is more what I heard in it. Much more complex and contorted and rich than the Gershwin, but without that gorgeous lyricism and joyous enthusiasm.

The Sydney Symphony Orchestra performed at the Sydney Opera House under James Gaffigan (conductor). They performed Shostakovich Suite for Jazz Orchestra no.1, Gershwin Piano concerto in F with Jean-Yves Thibaudet (piano) and Prokofiev Symphony no.5 in Bb.
Posted by Eric Pozza at 9:18 pm

Sounds like a great concert Eric. I have heard the Prokofiev but such a long time ago … so I found one on You tube to listen to to remind me, but there's something special about seeing/hearing a symphony live!