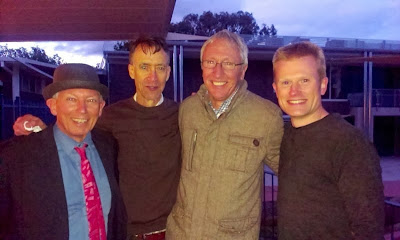 Jazz Republic played outside for a school barbie and it was fun but it was also bloody cold. Nice to greet James Woodman who was filling in for Mike on the night. But how cold! Wind chill factor cold; rain cold; fingers that refuse cold. I played with fingerless gloves, but I can only imagine the effect on exposed sax metal. Intonation becomes an issue, doubly so as Richard switched tenor and soprano. We had to play slower, too, so the blasters became medium swings in the second set. I enjoyed the few trio numbers, piano trio, then a format I’ve wanted to play for some time, sax trio. It’s open, chordless, contrapuntal and surprisingly modern sounding with much the same lines. I also enjoyed playing some of James’charts. We share a love for post-bop. Charts from Bobby Timmons and Ronnie Matthews as played by Woody Shaw. It’s an attractive era: interesting changes (not all 2-5-1) and written syncopations that transform easily into walks. Nice gig but memorably cold. On this night Jazz Republic were Richard Manderson (saxes), James Woodman (piano), Eric Pozza (bass) and Brenton Holmes (drums).
Posted by Eric Pozza at 9:00 pm