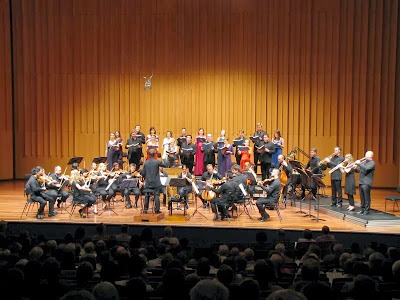 Maybe it’s wont of imagination but while I was sitting there I could imagine nothing more beautiful or more perfect. We were at Llewellyn Hall at the Australian Chamber Orchestra (ACO) were performing Bach’s Christmas Oratorio with the London Singers. This is perhaps the work that brought me to classical music so it holds a special place for me. They performed the whole, all 6 cantatas in one concert with a lengthy interval. It adds up to almost 3 hours of music. It was performed in German, at baroque pitch (lower than A440) and the instruments were of period. The baroque trumpets and natural horns and oboes d’amore and da caccia and wooden flutes and the oddly balanced bows and presumably gut strings and that busy chamber organ. And those fabulous voices on those fabulous exultant choral passages and the dignified tenor evangelist and the interplays of soloists. The choir numbered about 20, about 2 in 3 were women, and a good few of them took solo roles at some time. These were wonderful voices, strong but gently formed, clearly articulated and precisely pitched. I heard two of them on radio the next day saying there’s not one bum note in the whole series. I could only agree. I left thinking this is 6 cantatas and probably just a few weeks of work for this journeyman genius. Bach would produce this stuff at incredible frequency and speed. This cycle was first performed over several days at Christmas to entertain the churchgoers. I’d imagine a composer could make a life’s reputation from just one of these cantatas. The melodies were a delight; the massed choir, tear-jerking; the accompaniment, divine. Other thoughts? This is chamber, so the sound is contained and fairly small. How good is the ACO? Some virtuosic passages by violins or another by cello/bass in unison were stunners. The trumpets glowed but didn’t overwhelm. I noticed one spot where the woodwinds were too prominent but that was reigned in by the next line. I was amused to hear arpeggiation every bit like 70s synth arpeggiators, and stunned by the modernity of one strange high passage from violins, somewhere around the fifth cantata. Obviously there is nothing new under the sun. There was considerable informality, movement on stage by musicians and singers, casual awareness when not playing, mostly cool black but unmatched dress colours amongst the female singers. More musically, cycles that just must be jazz fifths, playful business of interplay, say between soprano and oboe, or two violins and tenor. Llewellyn wasn’t quite full, but I think it was the only time I’ve ever seen all the audience standing for an ovation. Me too, and I seldom stand. I’d thought this could be a CD, it was so close to perfect, although there were just a few quibbles that the ACO would presumably want get right before a release. But so close to perfection. Exultant and intensely beautiful

Too many musicians to list. The Australian Chamber Orchestra was led by Richard Tognetti. The choir was the London Singers. The performed the full Bach Christmas Oratorio BMV248.
Posted by Eric Pozza at 9:39 pm