What a role has man 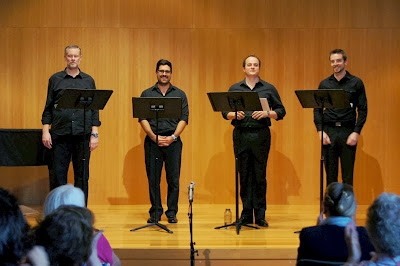 I was at the Lords of misrule / Christes Maesse concert of the Pocket Score Company when I started wondering about men in mediaeval days. These are four dignified and beautiful voices joined in complex interlinking lines, singing with the absolute belief of the time, with voices from manly bass to proud counter-tenor. For male choirs, I think Rugby or Wales, not these fine and exquisite part-singing monkish types. I place this choir in early European music, around mediaeval/renaissance, mainly due to David Yardley’s influence, but David Mackay spoke of his pull towards baroque and Bach so I guess there’s some productive tension here. But it’s all exquisite and dignified either way … at least when it’s not lusty. The concert had two brackets, each of three or four grouped songs. The first was early, plainchant and religious music. I noticed the gentle attacks, the clear voices, complex harmonic movements and one song with an organ-like vocal pedal: all very unmodern and reminiscent of stone and European cathedrals. The next set was introduced with jokey comments about a tune “not performed for 200 years … until people got a sense of humour”. This was renaissance with spikey rhythms and crochets bouncing with quavers and new harmonies of 3rds and 6ths. There was a short Bear’s Head carol which was particularly relevant as Boar’s Head ale (spiced, dark) was served after the gig, courtesy of a local brewer. [That’s another interesting thing about Canberra. We have a fine brewers’ club which has won around half of the National Championships]. Then some originals by Davids Yardley and Mackay. DY’s was arranged from his original for three female voices and DM’s was a combined unison exposition with parallel harmony and overarching counter-tenor in response. There was more, including a song by Loyset Compère which was trawled from history by DY, and, for encore, a modern song sharing the Christmas / Marian theme, Lamb by recently deceased John Tavener, another with unisons leading to devilishly difficult dissonant harmonies. This was only their second concert of 2013 given DY’s overseas posting, but they are promising more gigs next year. I’ll look forward to more otherworldly music from pretty-deep history sung by these wonderfully commingled male voices. On the day, Pocket Score Company were David Yardley (countertenor), Daivd Mackay (tenor), Paul Eldon (tenor) and Andrew Fysh (bass).
Posted by Eric Pozza at 8:48 pm