Last night at the Loft 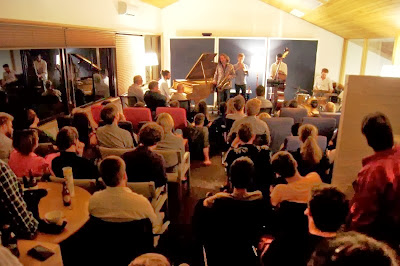 It was a big affair. The place was full to overflowing when I arrived. I was late after the Ben Winkelman concert. I arrived to John Mackey & co blowing on Have you met Miss Jones. It’s a standard blowing tune and a favourite with its early take on Coltrane changes (read Giant steps). There was a break and Ben Winkelman arrived with his trio. They played their odd-timed samba and it was a blowout in this lively, jazz-aware audience. Then John Mackey sat in for Beautiful love then Alex Raupach for the next and gradually the bands changed through to the early morning and people had work and were leaving and the night was ending.

They ran over 100 gigs at the Loft. I must have got to at least 80 as did Brian and Keith and Robyn and Geoff and the regulars. It was a small and idiosyncratic venue, but clean sounding, comfy for an intimate audience and it had that grand piano. We heard some excellent music, international, interstaters and locals. The Loft continues in a combined series with Pauline’s Canberra Grammar Gallery series. It will be at Smith’s Alternative every Thursday from 16 January. Each night a band, 8-10pm, then a jam. Charged for the band; the jam is free for all. There’s a grand piano, stage, lighting, PA, beverages, café tables. Nice venue and with any luck it may spread the jazz message more widely. I’m looking forward to this new era in Canberra jazz. Thanks to the Loft team for their work over recent years and for the coming coordination at Smith’s. Luke Sweeting and Andy Butler and Jack Palmer who ran it early on; then Alex Raupach and Tom Fell. Thanks to Dr Tim Nielsen who lent the piano and premises. Have I missed anyone? Also to Pauline for the parallel Canberra Grammar Gallery series. Their last gig is next Thursday with ex-Canberra, now Parisian guitarist, Daniel Hunter. Not one to miss. Then Christmas and Smiths next year. It’s teams like this and their musos who study and perform, who make this mature and intelligent and too little recognised artform possible.
Posted by Eric Pozza at 7:44 pm

Email ThisBlogThis!Share to TwitterShare to FacebookShare to Pinterest
Labels: Loft