The pleasure of informed delicacy 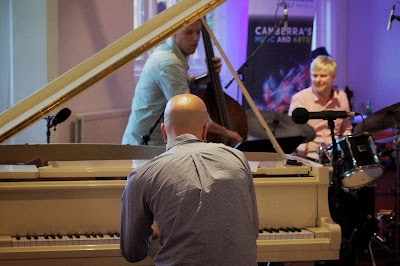 Ben Winkelman is a delicate player. Richly detailed. His tunes display complex structures and changes. They are heavily syncopated with written lines defining rhythmic and harmonic relations of bass and piano. The solos, piano, bass or drums, appear from a vista of chordal movements and subtle repetition. His solos are similar. Exploratory but unobtrusive with rhythmic tension and symmetrical sequences and conversational embellishments.

Two originals were from an earlier period and channelled 1920s and ragtime although with a modern ironic take and historical respect. Drummer Ben V fits perfectly with all this, toying with tone and splitting and conjugating rhythm. Alex and Ben V both rode freely over the beats, implying structure and responding to it without obviously stating it. Admittedly this wasn’t always true: there were two fairly straight works with more traditional cyclic structures, and Alex was persistent and unending with the bass line on Five Odyssey, a salsa in 10 as I counted it. This was the final tune at CGS and later the intro tune for the jam at the Loft, so it’s a favourite in public. They played Monk’s Bye ya but mostly these were originals by Ben W. That early pair, Tomazo variations (?) with a ballroom melody and swing feel and diatonic harmony with heavy accents, and Maxine’s stomp, a ragtime feel about a deceased cat. The others had various odd times, like Remolacha, the beetroot song (long story), that switched back and forth between 6/8 and 4/4, all latin, or Prospects, more standard with an even rock feel, or Other way, a lovely 3/4 ballad-styled tune or the Schlep in 5/4 or Westbury with floating piano chords over slow rock drums and sparse bass. This doesn’t suggest off times but the written syncopations and the players’ styles supplied it. Ben W with his diverse tones (including a cowbell kick), constant and obtuse polyrhythms and playful articulations and splits of the beat shifting all over the tune and seldom settling. Alex with his sharp syncopations, similarly precise 16-th notes, expressive intervals and richly expressive solos that often spoke to the mainstream of jazz melody. And Ben W with his easy nature, joy in performance and finely wrought but unassuming solos over detailed and expansive tunes. It all makes for a special night of contemporary jazz at the highest level. Great stuff. Ben Winkelman (piano) returned from the US for a tour with Alex Boneham (bass) and Ben Vanderwal (drums). They played at the Canberra Grammar Gallery.
Posted by Eric Pozza at 2:48 pm