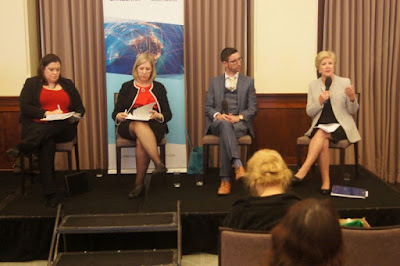 This session was called Fifteen Years On : Where Next for Terrorism Laws? I've followed these laws developing over time, blithely bulldozing human rights and privacy and the rest, accepted by what seems to me, at least, an unthinking population that fears terrorism (don't we all) but doesn't notice that the numbers in Australia are ingratiatingly tiny, repeats the line "nothing to hide" not imagining any possible alternate futures (did the Germans, amongst the most advanced societies of their time, think that way into the 1930s?). So, I've subscribed to a VPN but there's still a two-year record of my location at any time, accessible by a number of agencies with no judicial oversight. We fretted about the Australia Card but this is relative steroids. As for pre- and post-sentencing detention, by decision of Ministers and Police again without judicial oversight. Preventative detention, to prevent a crime, innocent until proven guilty? Nothing done, so no guilt. Or removal citizenship, not by a secret Committee, but by a legerdemain of self-action. I can see the dangers and recognise the bind of the politician, that they must be seen to be doing something, even as the legal profession frets over the extent of legislation put in place and much being contrary to the rule of law. Ever more fears, ever more legislation, reactive to the latest atrocity, here or elsewhere. Yep, it's difficult, so leadership is required. Pusillanimous chaperoning of public fears is not leadership even if it is politically serving. How did Fraser, in his days, lead Australia to accept Vietnamese refugees? [Strange how he changed over time, from despised by the left to statesman speaking truth and Whitlam's mate]. None of this is as simple as suggested.

But what of the session. Some were there to hear Gillian Triggs, now hero of many. The others were Helen Watchirs, recently appointed ACT's Human Rights Commissioner, and Fergal Davis of UNSW, all facilitated by Karen Middleton and introduced by Jon Stanhope. They talked mainly around detention, but touched on metadata retention later. About how the laws have ramped up since 2001; about the surges of fear and anger through children overboard (misleading as this was subsequently found to be), Tampa, then 9-11; about the lack of human rights provisions (other than Vic & ACT); about control orders and long sunset clauses and a lack of legislative review; about comparisons with other rich countries (our laws are more draconian); about detention as an executive regime rather than a criminal law function; of the surrounding secrecy, for "on water matters" and detention centre workers (this is asylum-seeker matters, but related); of definitions, like including "things" (broad, yes, but it's in counter-terrorism legislation) or the requirement of "imminent" threat changing to "possible, capable of happening"; that the rule of law requires legislation to be proportionate and necessary and someone suggested also effective; of ramping up legislation when the changes wouldn't have prevented the recent atrocity (say, with the age-16 murderer who was off Police radar, or Monis who was not under any control despite 20+ charges of aggression or violence. I have my own favourite here, showing this reactive mindset in legislation expends beyond terrorism. There was a death in an accident in Fyshwick. One speeding car [~110kph?] hit another car coming off a curb into a three-way intersection. In response the speed limit in Fyshwick was reduced 60kph>50kph. No relation to the accident but prompted by it). The inept but chilling Operation Fortitude by our own black-shirted Border Force came up, as did Charlie Hebdo and 18C. Through all this, all argued that counter-terrorism laws are necessary but they must be proportionate and necessary. KM summed up the discussion: Counter-Terrorism laws are necessary; they should be properly drafted and observed, with adequate protections; political responses should be proportionate; the threat is real but largely external; ACT sets an example for its approach to Human Rights; comparisons with other countries. Nothing to hide? Muse on this quote from Gillian Triggs: "sleepwalking into Executive overreach of power not overseen by a judiciary".

The Institute for Governance and Policy Analysis (Univ of Canberra) partnered with Museum of Australian Democracy at Old Parliament House to stage a "democratic conversation" Fifteen Years on : Where to Next for Terrorism Laws? Jon Stanhope introduced Karen Middleton (facilitator) and Gillian Triggs, Helen Watchirs and Fergal Davis.
Posted by Eric Pozza at 2:39 pm