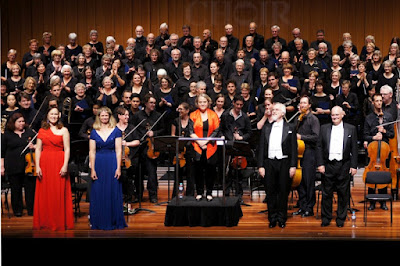 I knew of Elijah but not his story. Douglas McNicol was Elijah in the Mendelssohn Oratorio with the Llewellyn Choir and Sinfonia under Rowan Harvey-Martin. The other soloists were Rebecca Collins and Christina Wilson and Michael Martin and Charlie Barnes.

So, mainly a local affair with numerous recognised faces, but with import DMcN who went through Elder Con with a friend so I knew of Elijah. I didn't know Elijah's story and didn't know Mendelssohn's setting except a few choral pieces that I've sung: He that shall endure to the end and O come everyone that thirsteth. Both are memorable themes that had me lift my ears. We enjoy much music through recognition. If I didn't know it, certainly DMcN did: he carried music under his arm but I didn't notice him reading it and he was the busiest amongst all the singers. Elijah was baritone, supported by tenor, soprano, mezzo-soprano, and, for just a few lines, boy treble. This was a noble and impressive effort and not one for wusses. The program was three hours including the interval. I pondered the style at one stage. It's obviously not baroque, but the bass style is ordered and scalar like baroque and the singing style also neat and even. The big choral sections were a pleasure as these always are, with ~100 singers giving voice. I enjoyed watching RH-M, too, involved and guiding. A big performance of a Biblical story with much satisfaction that deserved a better-informed listener.