The oft-neglected maturity of youth 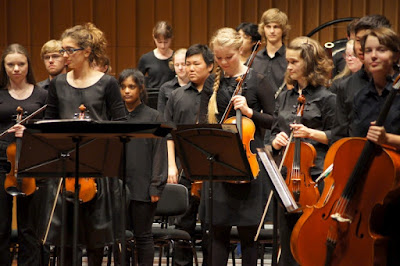 This was the first concert of the Canberra Youth Orchestra's Icons series for 2016. The first icon was Tchaikovsky with his Symphony no.6 Pathetique. Maruki will be performing this in a few months so I was particularly interested. This is a youth orchestra, not professionals, aged up to 30 but mostly in their late teens or early 20s. The performance was stunning. Not without its weaknesses, but this is no walk in the park.

At least to me, it appears a seriously difficult work, both for reasons of technique and interpretation. I laughed through the work, as they dealt with one difficult line after another. And being there, being in an audience, is so different from listening to recordings or playing within the ensemble. You hear different things with each interpretation, with each balance of instruments, with the time available while you're playing versus sitting listening. This was a mammoth task and a great result. I expected to notice the basses most, because that's the chart I know. Rather, I heard other parts, free from the task of reading and watching the conductor and getting the dots and keeping the count. This was exhilarating. Huge success. The program before the interval was vastly different. I trust that conductor and musical director Leonard Weiss will find somewhat different materials. First up was Ferdinand Herold Overture from Zampa. Nice starter and one needed to settle the ensemble. Then a series of arias with much loved local soprano Louise Page singing. Mozart, Puccini, Time to say goodbye and Sound of Music, no less. I sometimes strained to hear Louise in her quieter passages, but she would sing to fill Llewellyn for the crescendos. As for individual performers, I'll just highlight concertmaster Helena Popovic for the abandon and commitment applied to her obvious chops and Matthew Gambrill, a fellow Maruki bassist, for his easy skills as bass principal. In all, a great start to the year and the series. The CYO is a mighty orchestra in skills but also in size, now numbering 60 or so. And Leonard is a much respected and very energetic leader, pretty much as young as many of his performers. We enjoyed and admired this outing and can only look forward to the rest of the series.