Tale of two elections (spoken of one) 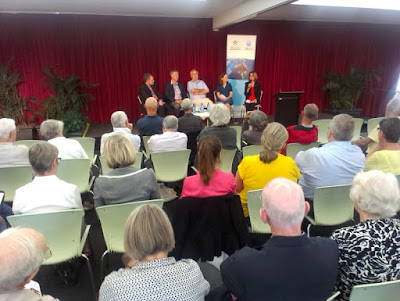 It's only a local election (with city-state-level consequences) but they say all politics is local (not in my book) and being informed is a citizenly sort of thing to do. And I'm annoyed with tram and Manuka Green and more and wanted to see the fireworks (there were none). The event was another conversation held in the Theo Notaras Centre called by Jon Stanhope and the Institute for Governance and Policy Analysis (IGPA) at UCAN. I enjoy these sorts of things and this was a particularly impressive gathering. Virginia Haussegger chaired a panel of four: Jack Waterford, Kirsten Lawson, John Warhurst and Ian Miekle. Suffice to say any local news junkie will knows these names. The topic was the election, or elections, coming up this year: ACT in October; Federal perhaps a double dissolution on 2 July, otherwise August/September. Lots spoken over the hour or so, but here are a few gems or themes. This ACT election will be different, newly expanded from 3 to 5 electorates, 17 to 25 MLAs, each seat with 5 members (no seat of 7 members as previously), each seat representing a clearly defined region. All this effects likely outcomes. KL suggested a likely outcome as 12Lab/12Lib/1Green; others concurred as far as possible for now. Dominating issues should be health and education, but trams (perhaps Manuka Green) are divisive. An "It's time" factor is possible, but complacency may reign. Labor's transitioning and Liberal's right wing may be issues. JW just expects different rents seekers to appear with different governments (he's been here, seen that). Panelists expressed concerns about short-term thinking, in voters and parties, and lack of vision. Jeremy Hanson was quizzed on social matters and didn't show as so right wing, but his backbench may be different ("fairly extreme"). There's possible punishment of Labor/Greens for allying, but this is a Green-leaning town. Panelists saw no particular personality factors. One wondered if a tram would be a chosen option now, with changes in technology in the air, and, given the cost and other problems with this one line, would any more ever be built. Interestingly, one identified the tram as a means of maintaining Labor support with younger Gunghalin voters (but it could also turn bad). Once again, 35yo+ white males are being categorised for anti-tram sentiment (I find this line tiresome) even though the panel, too, sounded none too convinced of light rail. Me-too-ism was identified in the Libs in the context that governments lose elections, oppositions don't win. Interestingly, one observation (Jack Waterford, I think) was that "politicians without belief get repudiated", to which IM responded, what of Abbott, with the obvious rejoinder that the belief "must be what people believe in". There was a mention of the Unions ACT campaign that seeks pledges to vote Labor. There's no way I'd do that and KL was similarly reticent. There was discussion on how to influence politics (the path is through parties), but how hard it is, and the level of powerlessness expressed by the public (90% federally; 70% locally). Then talk of social activism and vibrant communities and the fact Howard still went into Iraq despite widespread social action. Bob Douglas' Sea Change group was raised, but seen as a possible long-term influence. JW (Warhurst) suggested voters "must be brave" to change votes for issues or be ignored. Also that parties are not controlled by members, but by suits, so strong views don't change things, actions do (think Tea Party, Obama dems, etc). The Federal election was touched on but mainly only in passing. Perhaps there was more but that's the drift.

The Institute for Governance and Policy Analysis at University of Canberra staged a commuity discussion on the election(s) with Virginia Haussegger (chair) and panelists Jack Waterford, Kirsten Lawson, John Warhurst and Ian Miekle.
Posted by Eric Pozza at 12:41 pm