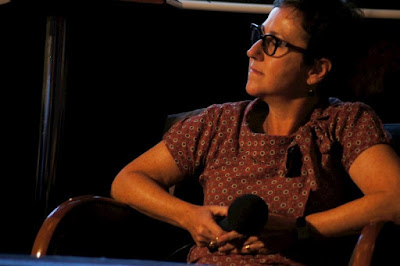 Politics in the Pub is usually a weighty outing, but not every time. Cathy Wilcox wasn't a weighty one. Her topic is heavy enough, but as a favourite political cartoonist, her method is light. I particularly enjoy her view of the world and the simple pen and watercolour presentation. How much can you communicate with a few lines! Cathy started with a quick screed on political cartooning: hold up a mirror; shine true light; notice things; show them we notice;

point out consequences and follow them; reassure the rest of us; poke fun; unspin the spin. There were more but I couldn't write quickly enough. Then a quick history of political cartooning (in one cartoon, of the King of France as a pear). Then an amusing romp through recent politics with a few tens of her cartoons as a guide. The audience at PitP knows the terrain, so this was fun. There were amusing quips: on Abbott "he had so much to give and gave and gave an gave"; on reality checks, that a large percentage of Australians supported Howard on Tampa; on DelCons (Deluded Conservatives) and their readiness to wreck the place to get their way; on Sovereign Borders and means justifying ends; on the gradual decline as once-offensive becomes normalised [think data retention and security legislation]. She responded to questions: about the "frisson" that indicates a successful cartoon; on materials (pencil, ink lines, watercolours, sometimes coloured pencils, and the pleasure of feeling paper); how the working day pans out; how she came to cartooning; on avoidance of topics and self-censorship; on cartoonists being sued and what's appropriately public or private. Amusing.

Cathy Wilcox (cartoonist) spoke at Politics in the Pub for the Australia Institute. Search images of "Cathy Wilcox cartoonist" or Cathy's website for a screed of her cartoons and a good laugh.


Thanks to Cathy for permission to display my photos of her cartoons here
Posted by Eric Pozza at 10:08 am