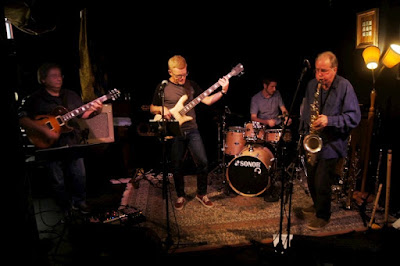 Raman are mates and I played with Mike and Nitya sometime back when I got back into jazz. I caught them at Smiths. They play around with groove styles, it seems mostly grooves designed by Mike, along with some Indian influences form Nitya. I first thought of Japanese noodles but they are spelt with an e. This spelling suggests Raman spectroscopy from the physicist who discovered the Raman effect (light scattering thorough transparent materials causing changed wavelengths) but I doubt the group thinks of that during a performance. Mike is strong on guitar with a well-developed use of pedals.

His guitar can scream. Nitya adds a range of acoustic colours: concert flute and various bamboo flutes, alto clarinet and tenor and soprano sax. Perhaps my favourite was his Indian influenced wordless vocals in the liveliest tune I heard, variously called Sitar and blind snake and Broken sitar and snake. I guess the contested title is a running joke. Certainly, I couldn't guess the title from the wordless melody, but it felt authentic and wordly and had a nice drive. The groove was stronger and the solos easier on this one, the length more indulgent and the tones varied, with solos from guitar and wooden flute and soprano sax. Otherwise, this is instrumentals, blues tunes, virtually unnamed numbers like Groove no.5 and Mike's other song and Mike's blues. But they range widely, as with Highland swing and a latin called Sail. The latin felt comfy; the Highland swing didn't particularly say Scotland to my ears, but it worked as another attractive groove. Good to see old mates playing the scene; too little catchups otherwise.