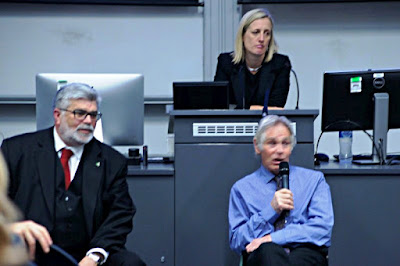 There's value in a good metaphor and this was a beauty: laying into the CSIRO is "a bit like shooting Bambi". It was Kim Carr who said it and he's a pollie so he'd know the value of good talkin' but this was a stunner. The message was that the CSIRO may be less thought of these days, but is iconic and part of the mythology of Australian 20th Century history, like Gallipoli or Vegemite, and you touch it at your peril. We were at a "Community Consultation" about the CSIRO cuts. It was organised by Labor so serving some political purpose. The various introduces included all out local Federal Labor pollies (Gai Brodtmann, Andrew Leigh and Katy Gallagher) but the main speakers were John Finnegan (CSIRO Fellow Professor, FAA) and Kim Carr (Senator, Shadow Minister for Research and Innovation, with considerable past experience in the portfolio as minister). There was talk of "innovation" real or political chatter; various CSIRO successes; science literacy and that period without a science minister under Abbott; climate change (denial); the "literal decimation" of CSIRO (1 in 10 jobs are threatened); the backlash from Australia and internationally. CSIRO staff could little speak of internal matters (public conversation being a standard of conservative, business-oriented free-speech advocates). JF spoke of the integration of science teams and how it develops and is required for modern science, giving a fascinating example from his own experience. All this with relevance to climate research, long-term preparation, innovation as more than just consumer gadgets. Kim Carr spoke from his experience as past relevant minister, of priorities and management and governance and how the minister actually had influence (Libs are claiming this is all happening at arm's length, that CSIRO is independent; but government has removed funding and put the Board in place, even if not directly the CEO). He observed that the changes are a "very bad idea, very poorly implemented" and I understood he quoted Larry Marshall saying "change its culture and its history". ["Change history"??? What Stalinesque intention is that?]. I understand this was from the Senate Committee hearing. KC promised more in policy during this extended electoral campaign, including a review of CSIRO governance and management. Then some Q&A covering things like German management of Sci-tech research; Alan Finkel's (Australia's "Chief Scientist") actions; the role of CSIRO and developing and keeping some of our best minds; a real-life description of upcoming PhDs despairing of Australia for a career and seeking work elsewhere (innovative nation? think coal); Australia's descent as a respected scientific nation (CSIRO changes, coal and climate); research and mitigation (Larry Marshall's approach to climate change); climate and national security; Fair Work and its demands on CSIRO management to conduct proper consultation; CSIRO as a "glorified consultancy"; caretaker period and CSIRO redundancies and contracts; science outreach and public perceptions (the Bambi quote); alternates masquerading as science (anti-vaxxers and the string of conspiracy nuts). I liked KC when he responded to someone's "if only everyone could agree" saying this is not politics; politics is fundamentally adversarial because there are different views of the world and different interests seeking to be protected. Various groups were in attendance: AYCC (Australian Youth Climate Coalition); LEAN (Labor Environment Action Network) was new to me and Friends of the CSIRO was just plain new. I can only concur that these changes are bonkers and dangerous. I have written to Turnbull and the CSIRO Board on this and will continue. You too are invited. Save CSIRO for science.