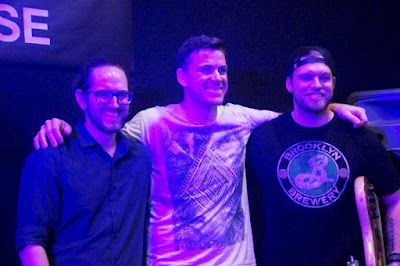 Like many creative professionals, Cleon Barraclough has a string of projects on tap. Jackal is one, a new one, on its first tour. Jackal is a keyboard trio - keys/bass/drums - (at least currently) playing a mix of fusion, jazz and Afro-Cuban. I have the feeling this will develop as a jazz funk band, although a very sophisticated one, but their gig used a number of earlier compositions from other outings. And one cover, a tune by Gonzalo Rubalcaba.

These guys have serious chops. Cleon showed me a chart for one tune: about 11 pages long. He told me he writes on Sibelius, gathering lines and ideas and grooves to form this most complex structure that moves time signatures, keys, grooves, feels, sharing spotlights, inserting solos. Only three players, but this is dense and high energy and every player is a driving soloist although each will also drop back to comp when required. The audience wasn't big so there was chatter, not least a demo of one part where drums play 4 and bass plays a dotted crochet 7-note pattern for an intertwining polyrhythm. Cleon added that he had to solo against that. Several times I noticed bassist Patrick look intently at Cleon to hold a challenging line or latin clave. Patrick was a stunner soloist, playing is that modern chordal style, fingering somewhat like a classical guitarist, soft thumbing, blistering lines with not a few sweeps, and using effective effects on a satisfyingly woody-toned bass (MTD 5-string). Cleon was on Yamaha grand here at the Groove Warehouse (unamplified and not always loud enough, especially for his band mates - the band wasn't so, so loud but it was electric and it was energetic) but also a Privia piano and Motif synth. Plenty of complex left hand work, glances at the charts for very difficult arrangements (all the band had charts and flipped pages regularly), nicely melodic solos and some lovely Afro-Cuban work. In some ways, I thought Luke on drums held it together: firm, accurate, fast and filled but with restraint, and full of fascinating interleaved rhythmic patterns on various limbs. The tunes were almost all originals, mostly long and complex, other than a ballad from Patrick called Roberta. The writing was pretty much even between Cleon and Patrick. I particularly liked the Afro-Cuban rhythmic complexity. Seems like there's a theme here, and it's Afro-Cuban. The fusion could remind me of Weather Report and its ilk and I my feet tapped with that, but the latin stuff had my whole body moving. How insinuating is this? So, fabulously virtuosic fusion and insinuating Afro-Cuban music. Great stuff.