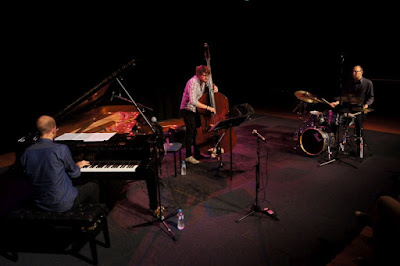 Vista Needle is a new project of Steve Barry and Daniel Susnjar with Tom Botting on bass and they are touring the Eastern states. The spiel talks of influences of Paul Hindemith and Federico Mompou so I was a bit surprised to hear them warm up, before the gig, with a supremely delicate take on a sentimental standard, When I fall in love. But what pleasure. Then the first tune of the night was another standard, Everything I love. Both played with piano trio delicacy, great awareness and subtlety and flexibility by Tom, wonderful inventiveness by Steve, enjoying the sound of notes, then playing a flurry or colouring with all manner of chordal or scalar fills, and Daniel present but quiet and playing time and, at times, playing with time.

I was thinking this is more Bill Evans than Hindemith. But the concert was mainly originals and some takes on the early 2th century composers. Early on, a Hindemith fugue that was a minimal, single chord, groove with a dotted crochet feel. It sat with slight variation, more promising than delivering after the clarity of a few standards. There were two pieces by Catalan Mompou (not known to me), both from his Musica Colada (=Silent music). No.3 was given a Monk treatment with various time signatures. No.15 was more flowing, haunting dissonant melody. But VN is also a vehicle for originals. Steve provided three. One with that common title, Untitled, started quietly in three with finger percussion from Daniel, then developed to a strong middle with deep syncopation and determined solo from Tom and a gloriously modern-styled piano solo. I'm thinking this is bliss. Then Steve's At the moment (Organic melody no.1), which was much more open, time indeterminate, free-styled. Daniel provided a tune with dedication to several renowned Catalans (Mompou, Dali and Gaudi were mentioned), more a pensive mid-tempo jazz tune. Another great bass solo and Daniel's first of two drum solos. I heard both his solos as intelligent dissection of time within a neatly overarching development to climax. Then a final tune by Steve, great solos all round, testing syncopations and unison lines, driving in 4 but heavily subdivided. So, really inventive and capable playing all around and some really effective originals and those explorations of Hindemith and Mompou. A fascinating and deeply satisfying concert.

Vista Needle is a project of Steve Barry (piano) and Daniel Susnjar (drums) with Tom Botting (bass). They played at the Band Room at ANU.
Posted by Eric Pozza at 8:42 am