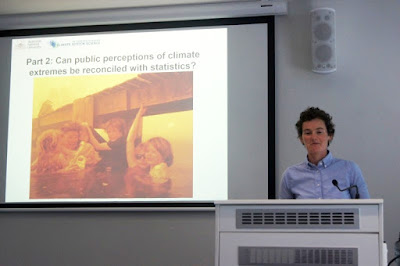 References to "complete hogwash" in the context of climate change amuse me these days, rather than infuriate me. That was not the case with Abbott, who, as PM, should have known better. There are others of his ilk who argue black and blue, finding excuses from within their reading bubble. If it weren't so tragic, it would be amusing that steel and Whyalla is likely to close down under the Libs with no carbon tax. Such boloney that all was. But it is tragic. It's tragic when we don't follow best evidence and it's seems inevitable that when we don't follow that evidence, we end up poorer. At least society and most people do, even if a few industries or individuals don't. Why invest in coal now (ask Qld Labor and Commonwealth Libs)? It's just plain dumb, like a slew of other decisions: mandatory sentencing (front page of today's CT); WMDs in Iraq; arguing there's no revenue problem and ignoring independent advice on super, CGT and more. But I'm off the topic.

Dr Sophie Lewis is at ANU, previously UMelb. She researches climate change matters and gave a presentation called "Australia’s climate extremes: climate change or complete hogwash?". For Hogwash, read scientifically and statistically testing a few exemplar statements by Abbott relating to climate change. That was the second part of the lecture. The first outlined the background of climate science, her work with David Karolyi towards quantifying factors influencing the risk of climate extremes using epidemiological methods. Suffice to say they found the likelihood of temperature extremes during the Angry summer of 2013 was either 2.5 or 5 times more likely (as I remember, the 2.5x/5x alternatives were related to ENSO [El Nino] inclusion or removal, but not certain of this). Further modelling showed a likelihood of more extreme "Angry summer" at 1/12,000 years for non-anthropogenic, whereas real world (accepting anthropogenic climate change) likelihood was 1/8. Scary numbers. This is now recognised internationally as the Melbourne Model.

But Sophie was concerned that just another piece in The Conversation and the like was not enough to change attitudes. The Australian press had ignored the press release for the above research; the New York Times was one of few media to note it. So what of ingrained attitudes, like "absolute crap", expect more extremes with longer records, carbon link to climate is "hogwash". She took some statements, expressed them in a statistical/scientific sense and tested them. Suffice to say the three statements failed. So the summary of it all is "warming of climate is unequivocal" and is "very likely [=90% certainty] due to the observed increase in anthropogenic greenhouse gas concentrations" (IPCC, https://www.ipcc.ch/publications_and_data/ar4/wg1/en/spmsspm-understanding-and.html, viewed 8 Apr 2016). Also, climate change influences climate extremes (the extremes are most dangerous), eg, the Aungry Summer of 2013 was found to be 5X more likely with anthropogenic cc; attribution studies are important (even though attribution of specific weather to cc is problematic), but this all won't change peoples' opinions. So, what will? Sophie left us musing on that.