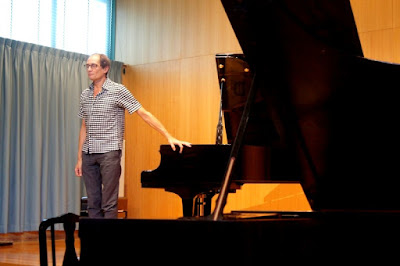 It's not often you feel you are in the presence of a seriously capable musical personality. Doubly so, that you are there with few people in a small space with good acoustics. I've seen and heard Roland Peelman several times and he's always impressed me mightily but this was more intimate. He was playing a piano recital at Wesley as a foretaste to the Canberra International Music Festival, of which he is the musical director. The music was broad with a nod to the latins. Five composers, sandwiched by Granados and Ginastera, with a pair of locals who have recently deceased, Roger Smilley, mostly based in Perth, and Jack Body, mostly travelling but based in NZ, and Ravel. I was taken by the Ravel Pavane for a dead princess, described as traditional in the western piano sense, melody in right hand, accompaniment in left hand and held together with the right pedal (an interesting and true pianistic image). It was just gorgeous. The Smalley and Body were more modern than this although Roland explained that neither was a ardent exponent of a combative modernism. The Smalley was the third movement of his Black and white. I found the description of the piece amusing: the first movement was all black notes played with the left hand; the second movement was mostly white notes played with the right hand; the third movement was two handed matching white diatonics with black pentatonics). The Jack Body piece was Three melodies, presumably inspired by his travels. I heard the first and third pieces as minimalist with single lines of regular (and sometimes deadened) notes, moving easily through changing tonalities. You could call it continuity and change (if that slogan hadn't become an object of ridicule of late). The latins sounded of guitar, and Ginestera has been often arranged for that, claves, dance and parties. Attractive. A further interest of this concert was the use of two pianos: the normal large (7'?) modern Yamaha that's normally in this space, and a smaller Steinway of 1915, stored in an adjacent room and belonging to Colleen, 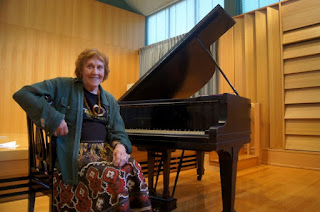 an emeritus staffer of the School of Music. The tones were as you'd expect, the older one softer and mellifluous, the newer loud and stark and firm. But all this is technicalities next to Roland's wonderful musicality. Several pieces were played from memory; his body expresses every inch of the music; nothing is unwarranted or flashy, just as it should be. For this I mean capable and mature. It's pretty rare to feel this so intensely, but I did with this performance. One for the memory and as a reminder of the upcoming challenge and pleasure which is always the Canberra International Music Festival.