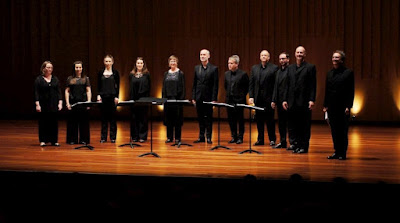 I guess you'd say ethereal or other worldly. Certainly, Fiona Maddocks, in The Observer, described the Tallis Scholars as "as near extraterrestrial as you can get sitting in a concert hall". They sing music from an era when the certainty of another world, the nostrums of religion, was omnipresent, but also of centres of wealth and political power to be served. Their 1%. Certainly, this was very beautiful music sung very, very beautifully. This is polyphony, multiple harmonic lines, perhaps 7 or 8, interweaving. Voices unaccompanied but conducted.

TS were conductor and 10 singers, five each of male and female voices. This was their eighth performance at Llewellyn Hall: their first was in 1985. They read their parts. They performed five pieces before and five after interval, and an encore. The pieces were genuine period - Philips, Tallis, Tavener, Clemens, Phinot, Crecquillon, Byrd - with a few modern composers in that idiom, Pärt and Muhly. Drones, polyphonic lines, parallel but delayed and pitch shifted, fugal. Strangely, I heard the sounds of hurdy gurdy at one time. The Muhly was perhaps my favourite, all big intervals and chromatics and tritones. The voices were beautiful, all supremely controlled, gentle entries and ends, with careful overall dynamics and internal balance within the group. Perhaps it lacked the cathedral echo we expect with this music, but it was sufficiently strong to comfortably fill the big Llewellyn space. Not that this is loud or intrusive music. Despite being described as rock stars of the style, there was just one on-stage patter (offering CDs for sale in the foyer) then introducing the encore, a Victorian madrigal. Then a dignified march off stage. The program handed out on entry described the music, but didn't list names. The website lists Peter Phillips as musical director and 8 named singers but some photos on the site show the full eleven. A moving feast, I guess, of period polyphony. That fits. So, despite some queries, this was a night of gloriously beautiful singing and some outstanding voices.