Not so brutalist baroque 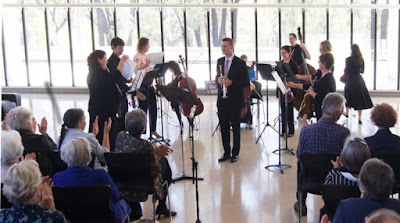 It's a strange experience to be transported to early baroque with strings and piccolo trumpet while sitting in a superb example of concrete brutalism, but this is the new world and this is our closest to a cathedral ambience in Canberra. It's the foyer of the High Court. Tall, spacious, relatively bare, with applauded acoustics. It's a much valued space for local musicians. Today we heard Limestone Consort, with guest Justin Lingard on some pieces, playing Alessandro Stradella, Purcell, Arvo Part, Telemann and CPE Bach. All old other than Arvo Part who is somehow in the tradition. The trumpet was a piccolo somewhere in the area of a baroque trumpet. It's such a pleasure: dignified, certain, sharp and clear but not strident.

The accompaniment in the trumpet features was stately, courtly, balanced. All lovely even if outside our common experience (can we describe any modern experiences as courtly?). We no longer dance as this music demands, but it certainly is danceable. Then two chaconnes, a daring Spanish dance in its time, from Purcell. Then the Arvo Part. At least for part of his career, Part was influenced by his studies of mediaeval and Renaissance music, but he also indulged in 12-tone and serialist forms. This was not stately like the other works, but regular triple time with holding crochets, moving through harmonies and passing through phrases with minimalist impassivity. Lovely. Then Telemann. Lauren is the leader of this ensemble and she likes to introduce her music, to speak to the audience. Good on her: it was interesting. She coloured the concert with various snippets on info. Not least, that Telemann was a self-taught composer, but more interestingly, that he's the composer with the most published works despite a fairly short life. How fascinating! (The rub on Alessandro Stradella was more lascivious: that he had attempted to embezzle the Church; that he had affairs with noble women, survived one murder attempt and was finished off by another. Oh, and that he developed the concerto grosso form). Telemann's work was his Trumpet concerto in D major, written in Frankfurt. Again, simple, dignified, gentle. Then to finish, son CPE Bach with a wonderful Sinfonia in A major. I sat back to admire Lauren's bouncing bowing and otherwise the clever bowing by cello and bass to handle some on-off phrasing. A pretty tune very well performed and nowhere near brutalism other than in its performance location.