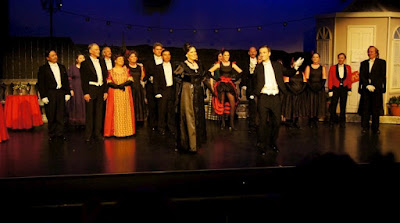 The Merry Widow of Bluegum Creek had me thinking of the difference between musicals and opera. I looked it up, and the distinctions were pretty indeterminate: opera is more centred on music, trained voices, traditional; musicals include more dance and acting and use popular musical styles and are always in the language of the audience. All pretty indefinite: I expect some operas were using popular music and stories and singing styles of their days. Given the popularity of the original Merry Widow (Vienna, 1905, as Die lustige Witwe), I expect the distinctions remain unclear. This take of the MW was performed by the Queanbeyan Players at TheQ with a recent Australianised libretto. It's 1901, Australia is just federated and the first Australian Embassy opens in Paris. The newly widowed wife of a mega-rich grazier/industrialist is expected. The PM has instructed that this widow must not marry a Frenchman because the wealth must stay in Australia. An old boyfriend of the widow works in the Embassy and likes the high life: bawdy bars, Maxim's, chorus girls and the like. I won't give away the rest of the story but it's light and fun and includes the can can. Louise Keast was Anna Gladstone, the widow, and she did a fabulous job, with an excellent soprano and some wide-eyed, playful acting. Likewise a string of others with some very impressive voices. It's a big operation, including a small orchestra in the pits and a big cast on stage (professional musicals are seldom so generous: they have to pay). There were various comedy parts (if rather droll) and they went down well. The chorus singing was very good. The feature singers were very impressive. I particularly liked Michelin and the Viscount and Danny and Lady Valerie. In one joke, Michelin knew all the backstreets and Anna offered to fund the publication of a guide when he wrote it. The embassy wives and staff were humourous (not least in a final can can dance); the two real dancers did a nice job; the orchestra too, accompanied and overtured with responsiveness and skill. The music is unchanged from the popular operetta original; just the story and characters and lyrics are changed. This was a fun night with a Aussie theme but opera voices. Well done all.